The Headless Horseman awaits those in the world of Team Fortress 2, as the first NPC in the popular shooter it’s up to players to tackle this boss monster in the level. Which level you might wonder? The new Mann Manor which is being released with the update as an attack and defend map covered with exploding pumpkins. 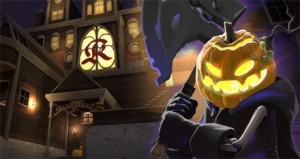 To run along the update, the game also includes new achievements and the Halloween Department in the Mann Co. Store with new items for all to purchase. Get into the game right now to join the madness.