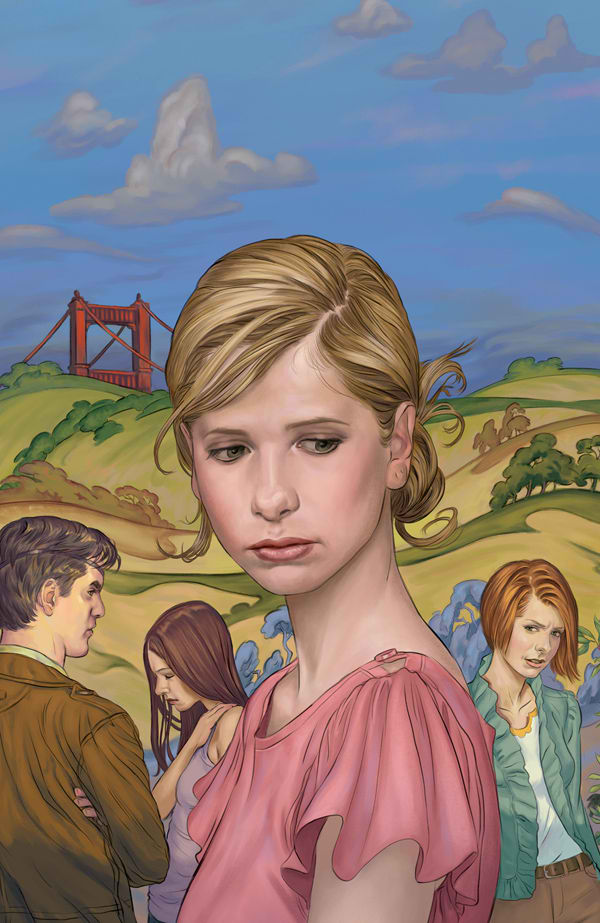 Freefall part 3, where to begin? This issue really drives the story forward. We learn a lot in this issue, and along the way there are some very shocking twists and turns. In Freefall part three we meet a new type of Slayer who has a very hands on approach to slaying and undoubtedly will raise some questions about what it means to be a Slayer. We learn a great deal about his past, what got him to this point and what his intentions are. Unfortunately, with the exception of Spike (yet again), this new character is the only one helping Buffy as she is still on the lam from the police. With the seeds destruction still looming, we learn that there are even more consequences than previously imagined. Vampires seem “different” and not just in that, ve vant to suck your blood kind of way. The one good thing that does come out of this new revelation about vamp 2.0 is that it appears Buffy and Willow’s relationship is finally on the mend. The police are still searching for Buffy claiming that they “just want to talk to her” and we find that Xander and Dawn are still having domestic issues, to which I say good, end it already! Spike being the dashing, debonair hero, is on his own mission attempting to find out who and or what is after Buffy. What he finds out is far beyond what he initially imagined and is critical to Buffy’s survival. The only question becomes, will he be too late? I think we can safely say, probably not, he’s Spike, I mean really, as long as he isn’t on a platform trying to save Dawn, what can’t he do!

This issue was very good, easily the best so far of season 9. It feels like everyone is hitting their stride. The story is moving along nicely, the dialog is good, however missing some of the snark, and the art is amazing. The ending is fabulous and has a great cliffhanger that will definitely have everyone chomping at the bit for #4. I think it’s obvious that I would recommend this issue without hesitation…Go. Get. It.