Spartacus Vengeance is on the verge of  return, the show comes back in just about 7 weeks, to prepare for that we’ve gotten a small look at the opener for the show with Liam McIntyre as the lead. For those who hate spoilers, just stop now as we might blow something key for you guys.

Our scene opens with speared horsemen and a dual sworded Spartacus leading them down a trail, we get a graphic showing of his prowess for combat, the calculations in how he handles his surroundings and his toughness. As his allied team emerges from behind the rocks it becomes a ballet of brutal engagement with he and his followers carefully tackling the entire group. We see the numbers growing and Spartacus throwing himself into the front line to protect his men and destroy the odds, each strike and enemy taken down with sheer force. The intensity the show brings is just as strong as ever, the story though, has a new path to expand his world. 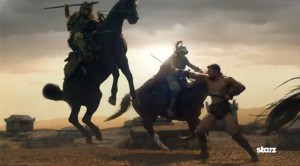 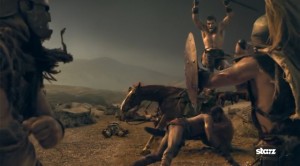 Visually it’s a series of struggle and drama, his men are battered and tired but willing and Spartacus is fighting with it all on the line, no injury is too much as he executes each opponent. The camera team showcases critical strikes and dominance in slow motion cuts from both sides in the heated exchange.

The scene sets the tempo for what Spartacus is up against, he has strength and courage but his power also rests in the loyalty and numbers of his team. We’re teased that Spartacus will take notice and become emotionally aware of the death that follows with such a campaign that he’s leading. Liam McIntyre feels passionate about the character development coming to the season and the potential for viewers.

Update: The Hollywood Reporter is linking the video publicly so we’ll pass it along too

Own an iPod touch 4G or iPhone 4? Wish you could tweak cases to your wishes instead of just picking from the selections out there? You can do it now to at least some degree thanks to the team at Incipio, the new bespoke case customizer is an app for your phone allowing you to dig through albums and apply them to your case for truly custom solutions.

Latest changes to version 1.5 of the app:

Pretty sweet stuff especially if you’re an iPhone or iPod touch owner, unfortunately it’s limited to just the 4G and 4 right now so older users will have to make due. Hopefully at a later point they allow this for other products, I would love to have a Rhyme case sporting an option like that, in the meantime I’ll have to track down a Silicrylic in black and look into their Inscribe line.
With all that rambling done, get started on your new iPhone 4 or iPod Touch 4G case!

The hits just keep coming, we also get a sign today that Google may allow for repeat performances of products. Paper Camera makes a second showing today in the lineup.

Check out the deals of the day for Android users:

Picked up Shazam, if I had a tablet I would most likely also grab Spirit HD and Sentinel 3: Homeworld, it might be a little too tight on my phone though. Baseball Superstars has some praise but also complaints of game data reset for new seasons.
Google will continue to roll out the goods all weekend so keep posted here for more deals.