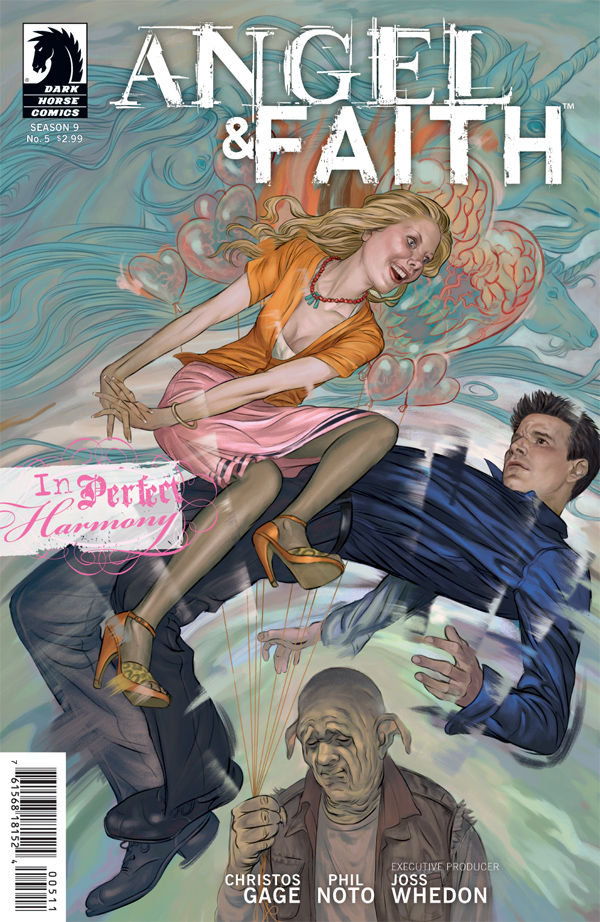 This new issue begins with both a new story and new character perspective as we find ourselves hearing Angel’s inner thoughts instead of Faith’s like we had in previous issues.  This issue focuses on two old friends, international vampire superstar Harmony and her assistant and best friend Clem.  Harmony has gotten herself into some trouble and has asked a reluctant Angel for help.  With a little persuading and a lot of whining she gets Angel and Faith to help her.  Angel Investigations is in full effect!  Angel and Faith begin trying to solve the mystery that Harmony has brought to them and thanks to Clem’s stripperobics and self-defense classes we get to see him unleash some serious ass kicking in the process.  As the story progresses we learn that Harmony has a lot of enemies (shocking?).  They keep coming up with dead ends so Faith offers some sage advice “when all else fails, bust some heads” and bust some heads they do!  However, all was for naught because they were totally off track (c’mon, Angel’s a little rusty).  In the end they do finally figure it out and Harmony actually teaches Angel and Faith something in her own convoluted way.

This issue was amazing, I loved it.  It was the best issue so far in the series.  It really has it all, some awesome pop culture references, sarcasm, and some surprisingly touching parts.  Harmony is captured perfectly as is Clem.  Angel and Faith are in their element with Harmony and Clem providing the comic relief.  The art is good, however sometimes it doesn’t totally capture each character. This was an absolutely phenomenal issue, go pre-order it now!