Trine 2 is here and Zoya, Pontius and Amadeus are back for a new adventure through wild relic realms in the world. The world is in danger again the Trine requires their help to set the world back on a path of peace before real danger comes and brings harm. With a flash of light and a bit of mystical travel they’re placed into the start of their next epic quest.

Trine 2 brings players back out of retirement, while many of them have gotten on to their own personal lives again they’re suddenly disrupted when the Trine returns with a new quest to save the world. While that’s often enough for most players to jump into an adventure, there are more details uncovered while playing along. A tale of two sisters and a lost kingdom become the cornerstone of the story, players must progress, treasure hunt and read up to understand the full details. In the event that a few items aren’t found, the level end sequences tend to tie the general story up before jumping again. The poems are left for players to get a snippet of the tale itself before the big level closing and hidden paintings help illustrate not only the art in Trine 2 but details around monsters, characters or how wonderful the place looked before the downfall. 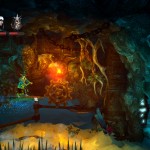 Normally the story is the core part of a game like Trine 2, in this case it’s important but the game itself plays like silk and challenges players endlessly. Trine 2 enables players to swap while playing through the story, it also rewards those players with special perks for taking up the challenge of wrapping up a chapter as a single character, without leaning on the other abilities of your team and suffering through the immediate shortcomings of just having 1 person. A bypass to this is using online to complete those chapters, having a Range / Mage and Knight on the same screen does prove helpful.

Trine 2 thrives on creativity to pass levels and gain experience, you can pass the game with just the bare minimum but it will challenge you to do so. The most reward comes from gathering experience and balancing or maxing out your characters as you go along. Unfortunately even with a dedicated effort my balances were just terrible at some points and I missed a few orbs to secure all the perks needed. As an example of this problem, with Zoya I found myself shorting her so often on upgrades after getting frozen arrow unlocked. There are other critical components but it was easier to build up conjuration as it came into use so often to reach high spots in single-player. 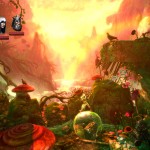 Magic is slightly questionable in Trine, I can understand the allowance for it though, if you’re using Amadeus you can only move the objects you’re not on top of. This means if you stack two planks or boxes you’re stuck right? No, it means you have to float the bottom box while standing on the upper box and use a careful hand so you do not break the spell engaged. It’s a tricky situation but it works to get you past frustrating zones or into secret areas without a partner.

There aren’t many words that can really describe how Trine 2 looks, it’s absolutely stunning to play through. It uses DX10 and DX11 features to make the game shine and glow with a mystical softness, for those with the ability to run it the FXAA and SSAA gives the cleanest presentation I’ve seen in a game for some time without actually bringing the system to a crawl. The plants, the atmosphere and characters just come alive and allow the story book quality of the plot to seep through and grab the player with an even greater hold. If the art here doesn’t grab your attention throughout the game I really don’t know what to say, in a world of grab 30% saturation shooters this shines like a beacon of how to make use of all that technology.

You can get a feel for the glow and the atmosphere that I can’t even begin to describe in the shots below. 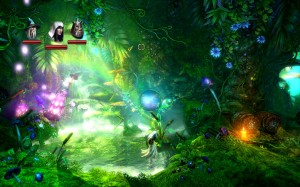 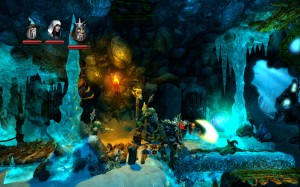 The soundtrack has a celtic charm to it with long instrumentals that carry throughout a chapter or even a zone. The breakup in the repetition comes with faster fight songs or dramatic music faded in when faced with a challenge and it happens often enough to give a sense of variety as it sucks players in. If there’s a complaint to the soundtrack I can’t exactly find it, it suits the game levels perfectly and allows lighthearted discussion to go forward while playing with friends without feeling like something is going to leap out at every new screen.

The only thing I could ask for is a bit more discussion between the characters, you have 3 people with completely different backgrounds running around, you think they would have more to say while fighting and wandering through such insanity. How is it you can you pass through a giant forest with huge mushrooms that bounce 20 feet up and solve insane puzzles and really just go ho-hum through the sequence? It wouldn’t be a request to fill the game with strictly dialogue but they almost come off as stone in some areas of the game and that’s always a shame when the rest of it shines so bright. 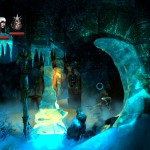 Trine 2 online is an experience, get some strangers, get some friends and have an adventure even if you’ve beaten the game already. There are enough rules and experiences to pick from that make it fun no matter what. On top of that, you can play the role of guide when people get stuck on puzzles instead of having the entire team rage quit and leave you to campaign the thing on your own. The only issue with online that could be noticed was from lag or ping times, in spike events the game would get very glitchy, this happened often when moving portals or using the wizard to connect pipes. The game can sort itself out but some cases are less forgiving especially when it comes to clipping errors ruining some mechanics.

Bugs aside, the enjoyment is great in Trine 2 online mode and players can have a laugh at how experience orbs drive some of the worst decisions a person can make during an online game. The absurd solutions and borderline cheating to bypass puzzles will keep gamers entertained for some time.

Every game has bugs, Trine 2 only has a few major instances. In the play-through it was clear that clipping was a factor online, getting portals locked together and having no way to pull it apart solo is a terrible thing and leaves the player with that save stuck with the issue unless they restart the chapter. The other bug came later in the game with a spawn issue, when dying the characters would spawn under the level in a strange black cave, there were no perks for being in this area and the only way to escape was to reload at the nearest checkpoint again. Issues like the spawning are rare, the clipping instances seem present anytime the lag sends an online game into oblivion.

Trine 2 is $14.99 and I have no idea why it’s so low after playing it, if you’re an adventure gamer looking for fun solo or with friends this is a must for your library. The theme is a relaxing departure from the norm of gaming, the audio is perfectly tailored to the game and executed with care. Having a side scrolling adventure game that challenges the mind to any level is a great thing, Trine 2 manages to do it just enough with variety and it cuts itself off before it becomes a repetitious grind session. Trine 2 focuses on what makes gaming fun, the experience and not just the combat or the magic and it’s a welcome change for those who do experience it. FrozenByte nailed the game again for fans and newcomers while bringing it at an affordable price for everyone to do a double take at.