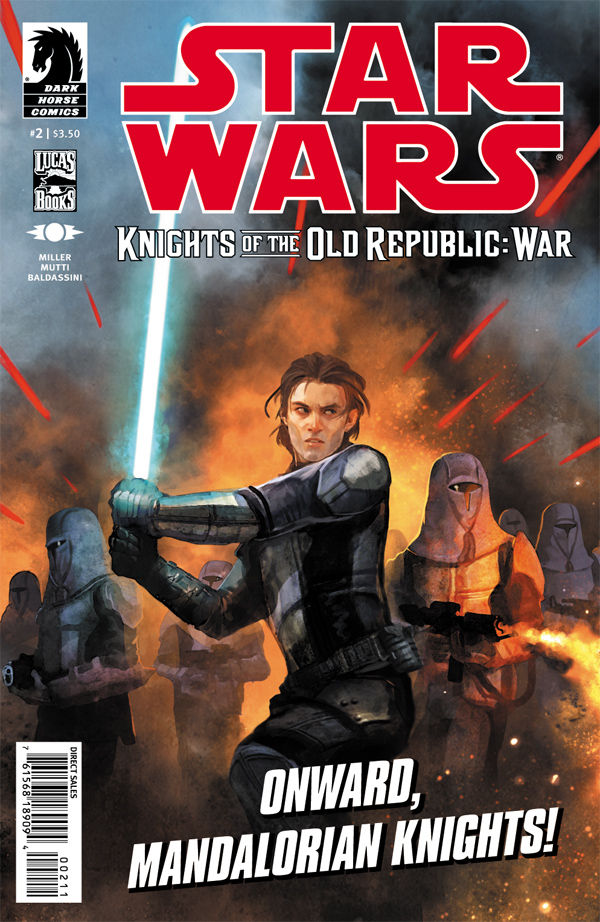 Zayne Carrick seems to have no luck at all, after trying to flee to start a new life he’s drafted into the Republic war effort and as we left him in issue #1… he’s about to switch sides in the same war after being captured. The Mandalorian’s are pushing with full force in their effort to conquer, capture and expand their footprint in the galaxy against the Republic with their own stockpile of Jedi on their side including Zayne. Was it Zayne’s best move to rush into the Mandalorian filled forest to warn them? We find out in this issue as the Mandalorian’s are exposed outside of just being a conquering group of mercenaries and slaves in this war.

The intro of course doesn’t support that last line, the Mandalorian Knights and soldiers are storming a new planet, tactically crippling their communications and taking over their people as a whole. Zayne is pressed to learn the ropes of this outfit as they go in guns blazing and everyone holds their own or dies trying. The Mandalorian way seems to escape him as he fails to preserve life and narrowly dodges enslavement. It’s war and he has to get with it or be destroyed by it, unfortunately this message doesn’t ring through all of the new recruits and it slaps Zayne right in the face.

Issue #2 of War takes us not only through the struggles of Zayne but the world of the Mandalorian faction, they’re builders and survivors, instead of living as slaves they have a surprising optimism to their lives and work. Going so far as to continue the new chapter by even setting roots as they go from planet to planet expanding their front in this war. It’s a shock to see the death mask removed from them even though some are unable to accept what they see before their eyes.

As I complain that some stories go by too fast, KOTOR War #2 extends itself out to give background while still showcasing the battles and personal struggles of Zayne as he’s caught up in this battle and learns that he might have a role to still fit in all of it.

The art and style of the book are consistent and filled with pure tones, taking on more of a comic form they’re stressed around accuracy to the Star Wars franchise and conveying emotion through the words more than just the art. The controlled strokes of the book rely on shadowing and faster gestures to really only emphasize deep thought and action sequences. The rest retain a very straight forward gesture as wounds, gunshots and more are all clearly depicted. For those who have enjoyed the KOTOR series so far, War is a worthwhile investment as it dives right into this battle and creates an early bond with the reader.

So you’re planning to download the Mass Effect 3 demo on XBL but you have no idea how you’ll get to play online… Well. Bioware and Microsoft have teamed up to solve that problem. Once you download the demo you’ll have a free limited run of Xbox Live Gold from then until the release of the game.

The question stands, will you be out celebrating Valentines day with that special someone or that special Xbox? I guess only time will tell, keep an eye on the market and load it up as soon as you can though because there will no doubt be a rush of downloads that day.

btw: that means you’ll be able to use that Gold Subscription for other games and features as well during the demo period