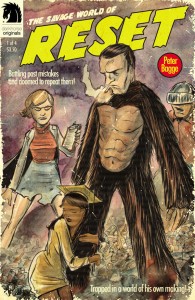 A burned out comedian, Guy Krause, is attending court ordered D.U.I. classes because of his recent arrest for road rage. In the class he meets Angie, a woman who asks Guy if he would be interested in her “research project.” She explains that the project is a virtual reality game that allows the person playing it to relive their life and make changes to their past. Guy is sold on the idea mainly because his career has seen better days, he’s broke and he has been told that his help could prove lucrative to him monetarily. As quickly as he begins the game he stops it because the first event they start with is a very traumatic one that has clearly shaped who Guy has become as an adult. He quits. Soon after quitting he assesses his debt, career and life and realizes he doesn’t have too many other choices and must continue on with the game. Will Guy be able to follow through with the project or will he just be too hard to work with?

This comic has a very interesting concept, however none of the characters thus far are likable. The burned out comedian is captured perfectly, no longer funny, just bitter and unpleasant. After his first experience with the game I could see Guy mellowing some and becoming a more relatable character. He has built his entire life around experiences he perceived a certain way and after playing the game for just a few minutes it appears things happened for reasons different from what he originally thought. The dialog and art are good, as is the story, but it just feels like it’s missing something. It could be that this is just the first issue and it’s just laying the groundwork for the rest of the story.