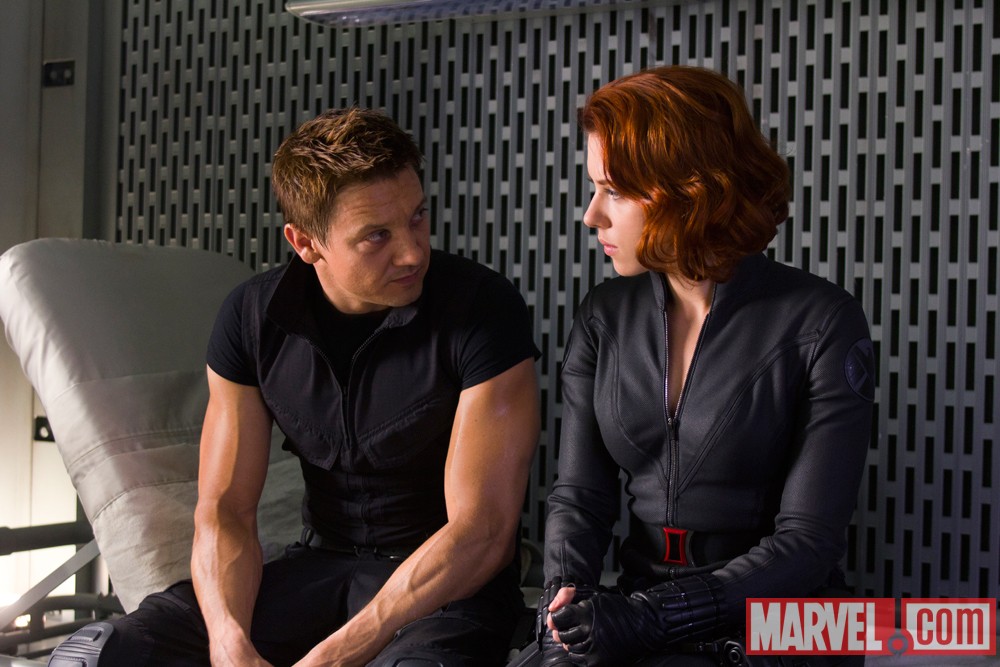 It was getting a bit much with all the Avengers posts but one highlight of this interview by Marvel stood out as a lovely moment that had to be shared.

Zack Zeigler recently talked to both actors for the movie on characters and costumes, we got some gems of the following that had to get passed forward.

“We are humans with high skill sets,” Renner said. “[Hawkeye and Black Widow] fight well together…and they complement each other.”

Jeremy Renner and Scarlett Johansson star as Hawkeye and Black Widow in “Marvel’s The Avengers”
Added Johansson, “Both of us fight hand-to-hand…but we’re fighting in a different way than everybody else. We do a lot of fighting on the ground.”

Johansson made her debut as Black Widow in “Iron Man 2,” where we learned of her affiliation with S.H.I.E.L.D. and that she wouldn’t hesitate to lay the smack down on bad guys. Renner made a brief cameo as the bow-and-arrow wielding Hawkeye in “Thor.”

For both Renner and Johansson, getting into character never posed a problem. The issue was getting comfortable in their characters’ clothing.

“It was like 800 degrees in my costume…and everybody looked incredibly uncomfortable until the cameras were rolling,” she said. “And then ‘Cut!’ and we were all like, ‘Ugh, this thing! Get it off me, it’s awful!”

There’s one more part that makes this priceless, although I’m not sure how great Mark Ruffalo feels about it.

Added Renner, “I think the humility award goes to [Mark] Ruffalo. [He was] in a thong or wearing something unflattering, and he’s supposed to be the [Incredible Hulk].”

Keep that in mind future potential Hulk actors, running around in a thong might be part of your job requirements. Outside of that you do get to look like a badass on the big screen and that just might make up for all of the labor invested.

To top things off we have the latest TV Spot showing a roll call of the team.