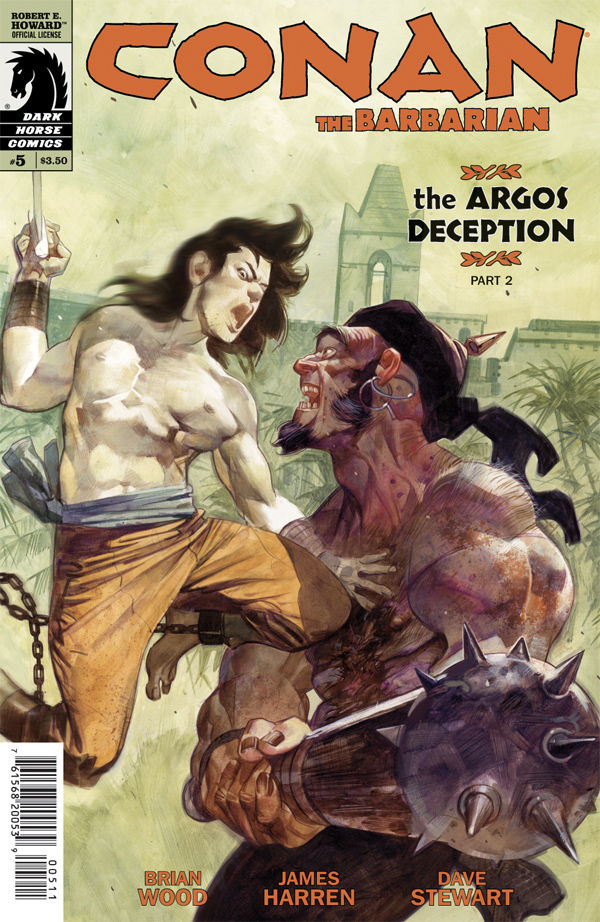 Early morning in Messantia, Argos a visibly beaten Conan is taken form his cell and brought to the gallows, as the crowd gathers around to see the cimmerian hero hanged. A guard begings to address the crowd about the crimes Conan has committed theft, Assault, and Aggravated Murder the guard then ask’s if anyone is willing to  speak for him and at the that moment, Bêlit who is dress as a noble woman agrees to speak and convences the guard to have Conan  fight for his life in a Gladiator match against Messantia’s champion, who appears to be a giant size man. Before the match starts the guard tells Conan that when he loses to the giant size man he will make Bêlit has woman. [spoiler show=”Story Spoilers” hide=”Story Spoilers”]Conan and his opponent start to0 battle it out, he quickly realize that his speed is a advantage against the massive man and uses it effectively dodging every punch the big man throws at him, with Conan’s distraction Bêlit sneaks off to execute the plan which is to steal the city’s gold as The Black Queen races through the city alleyways she is spotted and chased by a couple of guards, she quickly notice’s them and turns into a abandoned building and attacks them. Meanwhile Conan ‘s battle with the massive man seems to be coming to a end with him on the losing end as the Man stands over Conan sword high and ready to strike but before he gives the final blow a loud explosion rangs out which grabs the attention of Conan’s opponent who for a split second looks away, with a opening to attack Conan picks up a dagger and throws it at the man striking him in the forehead he then walks over and cuts the man’s head off, now a free man Conan stands ready do defend himself against all comers—————————[/spoiler]

Final Thoughts:  The Argos Deception Part 2 has a lot of action, which is a plus when it comes to the Conan franchise, this issue does a great job of expressing Conan’s thoughts and doubts, along with how the mind can be the biggest killer, this issue touches on that and how vulnerable it has made Conan he doesn’t seem as invincible as before, There’s one particular part where he’s at the gallows and it narrates how the situation has brought an unfamiliar feeling of fear which refreshing every once in awhile. In the end Conan The Barbarian #5 – The Argos Deception Part 2 is another solid quality issue that should satisfied fans.