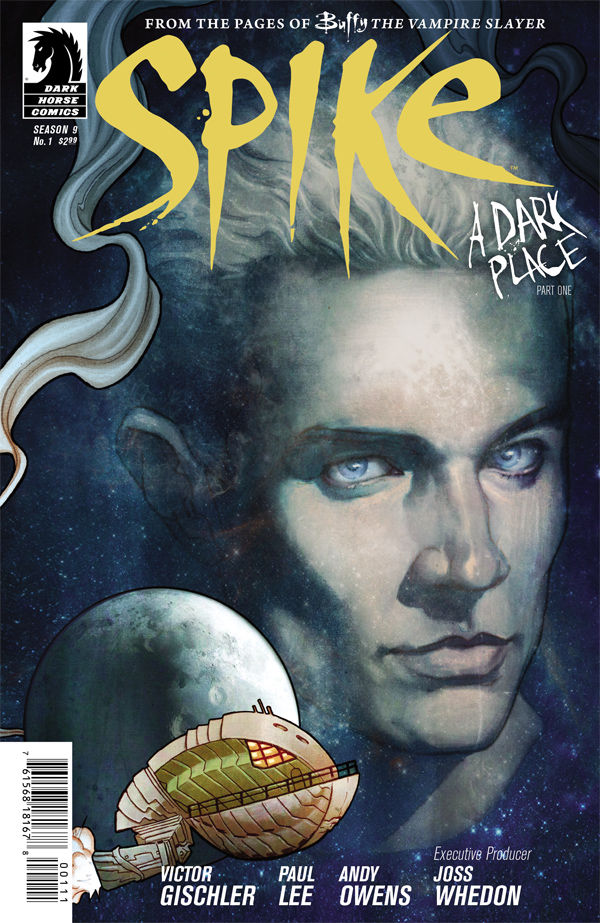 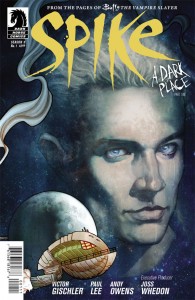 Script: Victor Gischler
Pencils: Paul Lee
Inks: Andy Owens
Colors: Cris Peter
Cover:: Jenny Frison
Alternate Cover: Steve Morris
Letters: Richard Starkings and Comicraft’s Jimmy Betancourt
Executive Producer: Joss Whedon
Published By: Dark Horse
After deciding that he can’t just sit around and wait for Buffy to call, Spike jumps in his roach mobile and takes off for the calm and serene vacation spot known as the dark side of the moon. In an attempt to gather his thoughts and clear his mind with various libations, Spike and his bug crew are on their way. Once arriving on the moon though Spike can’t seem to shake his super sad mood and the memories of Buffy seem to be everywhere. Spike’s bug friends refuse to sit back and watch him wallow in his misery so they devise a plan to get him back on track, which works, for a while anyway. Meanwhile, we learn that just like on Earth the moon has its own group of nasties with bad intentions. We quickly learn what those intentions are and all hell breaks loose. Will Spike and his bug army ever get off the moon or are they destined to become space junk? 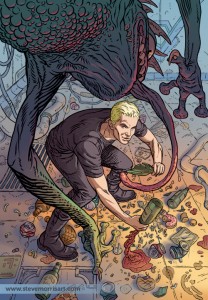 It has been no secret that I am a huge Spike fan, so truth be told I was extremely excited about this series but also worried about how it would turn out. I first have to begin with Jenny Frison’s cover, it is spectacular in every way, everything she does is always amazing but she somehow out did herself with this one. Victor Gischler’s writing is superb. He captures the nuances of Spike perfectly. There is a bunch of funny, but there is also the torment and pain which really encapsulates what Spike is all about. The entire team working on this series is top-notch, from the cover, to the writing, to the art inside everything is really amazing. This was a great intro issue and Spike’s bugs really add a nice touch with their oddness and full personalities. If you are anything like me, fear not, this is a great issue and an excellent addition to the ever-growing Buffy cannon.

Looking to get yourself setup for the upcoming year of new 52? Check out the sale at Tanga for the next 48 hours and get in on some awesome deals from DC for year subscriptions!

All issues include free shipping and you get 12 issues cover the next year of New 52 as they arrive at your doorstep. Get on it while you can, many of these are time limited at different intervals (Batman expires in about 10 hours) so get moving before they replace them with new entries.