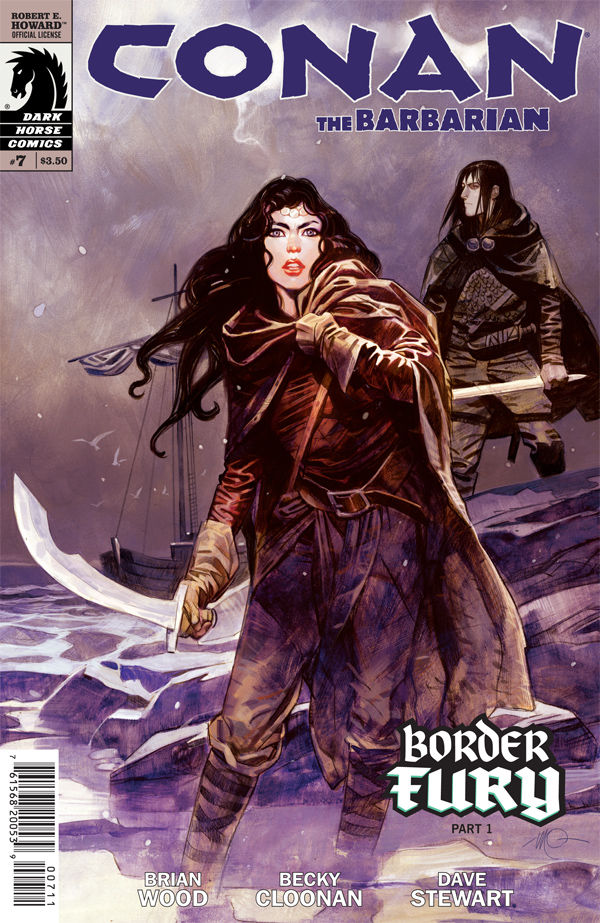 While recent Aventures in Messantia haven driven them closer together, it also brought a new path of uncertainly for the barbarian and Queen of the Black Coast. Now in Cimmeria the homeland of the her beloved, a place where her status as the black queen is unknown and not respected or feared…

This adventure starts in the present day with Conan and a blind Belit on the run from unknown warriors in the snowy high mountains of Cimmeria. As they take cover, Conan promises Belit that she will make it out alive. From there, it jumps back weeks where the two first leave the Tigress and make way through the Northern lands until reaching the valleys, hills, and the Dark wooded under skies of Cimmeria.[spoiler show=”Story Spoilers” hide=”Story Spoilers”] At the village of Duthil, Conan and Belit are greeted by his mother who shows some bitterness towards her son, she tells him that he must meet up with the elders to discuss recent events that have taken place. An angry Belit question’s his mother asking why does she have so ill of feelings toward her son. The Cimmerian woman replies sharply telling Belit that woman here conduct themselves differently then where she is from. The next morning Conan meets up with the elders to talk about an unknown man who is using his name as he causes havoc in local villages, the conversation ends with Conan agreeing to rid Chimmeria of a man who would tarnish his name and kill his own fellow Cimmerians. Meanwhile, Belit seems to be have trouble adjusting and has a brief confrontation with some of the villagers, to which Conan intervenes and promises her that if she stands with him and helps find the man who is dishonoring his name that he’ll do the same for her. Scene changes, we see a village being burned down and its inhabitants captured and murdered by unknown warriors dressed in black armor. As the men round-up the rest of the villagers, a man who looks exactly like Conan is sitting on a horse and proclaims himself as Conan

Final Thoughts: Border Fury Part#1 is filled with narrative  dialog’s, something I’ve noticed a lot from writer Brian Wood. Wood likes to script his tales in third person omniscient narration and in my opinion this format works for all of Conan’s adventures. It gives you sense that Wood himself is telling the tale and guiding the reader. One main focus for this issue is Belit, it seems the Queen of the Black coast is having a hard time adjusting to the non-piracy life and its quickly taking a toll on her mentally. Like Conan in the Argos Deception and Queen of the Black Coast adventures she is struggling emotionally. Wood is doing a role reversal with the two in Border Fury tale, which has sparked my interest greatly, I am waiting to see how this adventure unfolds and if Belit can keep it together. Artist Becky Cloonan is brought back and she brings a significantly darker and unique art style to this new tale.