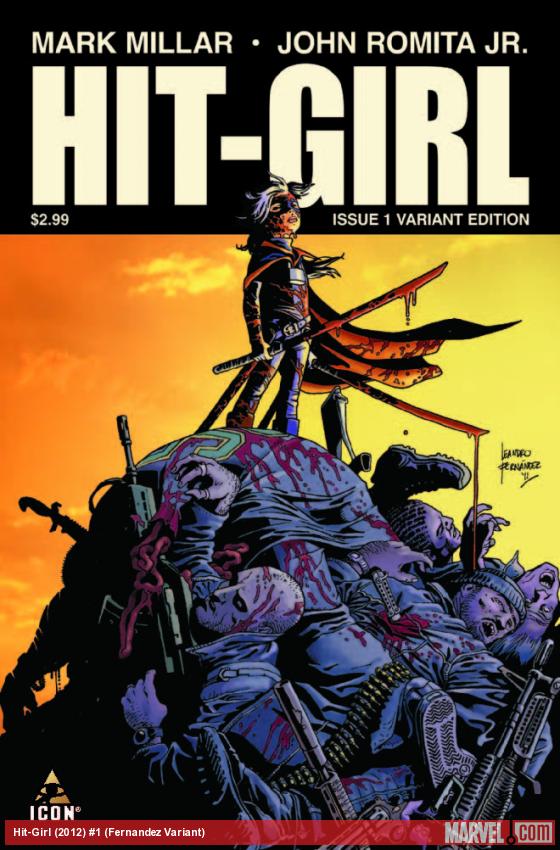 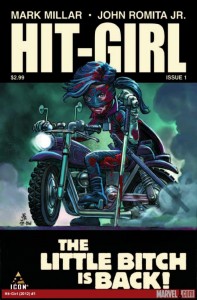 Hit-Girl is no more, well if that was the case we wouldn’t be here. Instead she’s back and so is Kick-Ass in a new series of adventures that will help tie up the gap between Kick-Ass and Kick-Ass 2. Not only are the duo involved but we see new faces and Red Mist return to the stage for this next act of the saga.

Issue 1 of the Hit-Girl series starts off with the criminal element of the city tuning up a teen hero, unfortunately in Kick-Ass fashion this isn’t them helping out by changing plugs and oil and helping their auto needs. Instead it’s a pipe, a lot of hitting and general street brutality, the goal is simple, sell out Kick-Ass and Hit-Girl so they mob can make an example of them. Given their vast knowledge of technology it seems they don’t understand that not everyone just knows who everyone else is in this crusade. As a result there’s a lot of excessive violence and death as they move down the list trying to execute revenge and their own personal declarations of triumph and try to secure the crown of Crime Boss.

Mindy is back in the public, this time taking up life with her Mother and Marcus going to the same school as Dave, facing the issues of being a kid in school with taunting, cliques and general drama that she never really faced in her training. While she could kill someone 200 ways she can’t use the same technique to shut down a diva trying to stay on their perch that insults her clothing choices. It’s a taxing time having to step away from something she knew so well but she hasn’t been sitting on her hands, instead she’s been ready for the next chapter of this battle.

Kick-Ass is his usual self, a bit paranoid and sketchy to be going head-on with so much heat around them and the heat from the mob still burning their feet. He’s game to support her though and make sure this goes through, even if his inner-confidence still leaves a bit to be desired, the fact is as far as the timeline goes. He only just helped take down one of the biggest crime bosses around.

Crime lords, street gangs, Red Mist and a hero war are all on the verge of breaking out and it’s only going to get uglier as the central heroes that set this game into play sit out of the field. If the end of the issue is any indicator, that could very well change and boy will it ever. Miller, Romita and the art team do a great job delivering a quality middle ground to clear up what happened in the off-time and we’ll have our second issue review of Hit-Girl #2 up shortly.