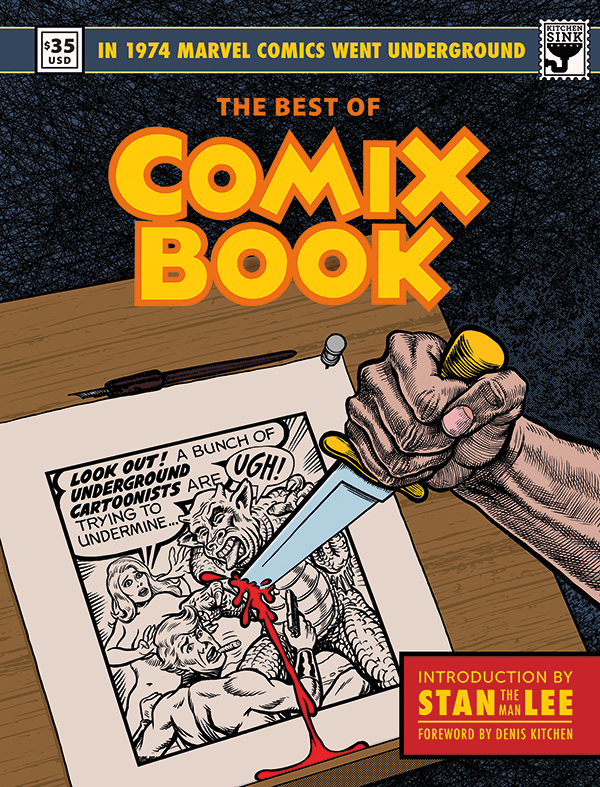 Publishing maverick and alternative-publishing pioneer join forces on a line of books, launching in late 2013

Dark Horse Comics announced today that they have entered into a joint venture to add the newly formed Kitchen Sink Books as an exclusive and independent publishing imprint.

The new imprint will be headed by alternative publishing pioneer Denis Kitchen and book designer/editor John Lind, who will share duties including acquiring and editing new projects, developing talent, and strategically guiding the imprint.

“I grew up an ardent fan of Kitchen Sink Press and Dark Horse Comics, so continuing to work with my business partner Denis Kitchen and Mike Richardson is always a thrill,” said Lind. “Their careers greatly influenced and inspired my interest in comics and graphic novels at a crucial stage—in many ways, it’s what drew me to work in this field.” Lind continued, “Kitchen Sink Books will be the nexus of our shared aesthetic values, united vision, and dedication to quality work.”

“John and I have packaged books for a number of first-rank publishers, but we have long discussed the ideal house to enjoy maximum freedom and creativity. In longtime friend and publisher Mike Richardson and Dark Horse Comics, we found just that,” said Kitchen. “It’s a kinship born of creator-friendly environments, a commitment to upholding comics history, and beautiful books produced by talented creators that we can be proud of. Our hope is that Kitchen Sink Books will connect with fans and aficionados by showcasing some of the best this medium has to offer.”

“I’m extremely pleased to be working with Denis and John on this new venture,” said Mike Richardson. “My relationship with Denis goes back to the earliest days of Dark Horse and we’ve had a shared aesthetic with regard to comics from day one. With John, we have one of the best designer/editors in the business. I’m very much looking forward to the exciting projects that will result from this new imprint.”

Kitchen Sink Books will initially release four to six books per year. The first book, scheduled for release in November 2013, will be The Best of Comix Book: When Marvel Went Underground!, a collection of the long-out-of-print underground Comix Book series (1974–1976) that was originally edited by Denis Kitchen and Stan Lee for Marvel Comics. The collection will include work from underground creators such as Joel Beck, Kim Deitch, Justin Green, Harvey Pekar, Trina Robbins, Art Spiegelman, Skip Williamson, and S. Clay Wilson. The book will feature an introduction by Lee, a foreword by Kitchen, and an essay written by James Vance (Kings in Disguise), accompanied by unpublished artwork, photographs, and correspondence from Kitchen’s archives.

Catch an exclusive preview of The Best of Comix Book: When Marvel Went Underground! on Bleeding Cool.