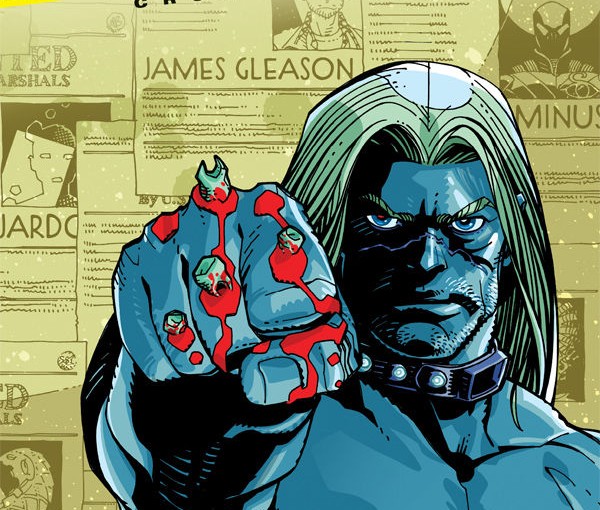 Bloodhound: Crowbar Medicine #1 is an interesting comic brought to us by Dan Jolley and Artist Leonard Kirk. The synopsis for the story is goes like this Travis Clevenger may not have superpowers, but he can put a beatdown on anyone who does!

This was a straightforward traditional first issue, Character introducing, plot outline etc, so you can’t expect much because of that since the writer is trying to setup his or her story. But Bloodhound: Crowbar Medicine #1 starts off fast with a fair amount of action, A bank robber with super powers is being chased by the Atlanta police,  Travis is visiting his family and we see that there’s some issues with him and his oldest niece, we then see the bank robber as he evades the police  gun fire. FBI agent Shaffon who is at a park with her friend Kelly, she then gets a call about the chase and she leaves and goes to pick up Travis. Now cornered the unknown banker robber is shot in the shoulder buy an officer, that causes him to use his unknown ability and he destroys all the neighboring officers and buildings around him.

Travis and Agent Shaffron arrive at the scene only to be greeted by the police captain who has a few words towards Travis, again there’s issues here and I hop later on in the future they dive into this. Travis without the permission of the police walks down to where the man is hiding and tries to convince the man to give himself up, and it looks like its going to happened until one of the policeman shoots at the man and causes him to get angry and triggers his powers, Travis jumps in front of the man and absorbs the blast, well at least that’s what it looked like to me, Travis then knocks the man out cold. In the hospital Shaffron hassles Travis about his recklessness. A new break appears on one TV’s and a Dr. Bradley announces that he has powers similar to that of the bank robber but with help of a chip he is able to subdue the his power, he then says that with this chip criminals with powers will no longer be a threat.

The issue ends with Travis commenting on how this new chip will cause a lot of problems in the world.

Final thoughts: There are some really interesting back story setups in this issue, I don’t know if Jolley meant it to be hopefully he did. Also we find little to nothing about Travis other than he is an ex-con that has a checkered past. Maybe in the next issue we will findout more about Travis and this mysterious Dr. Bradley in the upcoming issues.