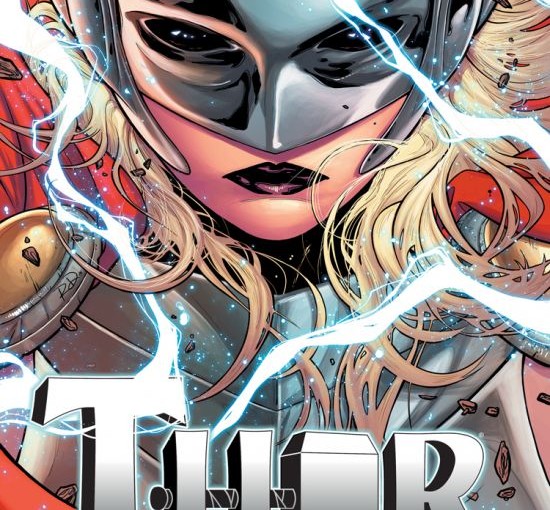 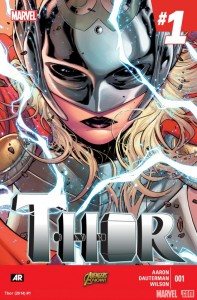 The long await debut of the new female Thor has finally hit the scene, When Marvel first announced that writer Russell Dauterman’s version of Thor would be a woman many fans were outraged, but as time went by people wanted to see just who would take on the mantle of Thor and if she would have any connection to the original Odin son, and in this first issue we get a pretty good idea that.

The issues starts in the Norwegian Sea with a Roxxon deep water excavation team deal with an attack from the Frost Giants, meanwhile on the moon all of Asgards warriors including the great Odin himself are seen standing around a broken down Thor as he stares at Mjölnir, it seems as if Mjölnir has deemed Thor unworthy of using its power, the most intriguing and surprising thing is how lost and broken Thor looks in one panel we see him standing over Mjölnir begging for it to move, Freyja then informs Odin and the others that The watcher told her about a battle the Avengers had and at one point Thor was separated from the others and during that time something was said to him which made the current situation, Odin on the other hand isn’t buying it and he forcefully tries to pick up the hammer but was denied also. When word of the frost Giant’s attack on Midgard hits Odin, he and Frigga have a disagreement about whether or not they should help out. Thor on the other hand leaves for Midgard stating he is going home.

Back on Earth Malekith the Accursed is there as the frost giants invade Roxxon, It seems that a key treasure/power source was lost in the area Roxxon was excavating, Thor arrives in time to stop Malekith from causing more havoc. Malekith notices Thor’s decease in strength due to him not having Mjölnir, Malekith pushes Thor back while also taunting him about his missing hammer, over powered Thor is beaten

The issue ends with Malekith locating the treasure/power source the frost giants were looking for, we then see a defeated Thor falling to deep sea, the last page we see a shadowy figure walk up to Mjölnir and as they begin to pick it up the phrase of the hammer changes “Whosoever holds this hammer, if She be worthy, shall possess the power of Thor”.

Final Thoughs: This is relative straight forward story with a cliff hanger at the end of it, there wasn’t anything in particular that capture my interest besides the obvious. However I did enjoy the moments with Odin and Frigga, with Odin back as the All-father Frigga’s role as the All-Mother and ruler of Asgard is no longer need but throughout the issue she still acts as if she is, this causes Odin to remind her of role. In the upcoming issues hopefully we will have answers to some question readers my ask, such as, what really happened to Thor in that battle with Avengers?, What exactly are the Frost Giants and Malekith looking for? and finally, who is the mysterious woman that picked up the hammer?.