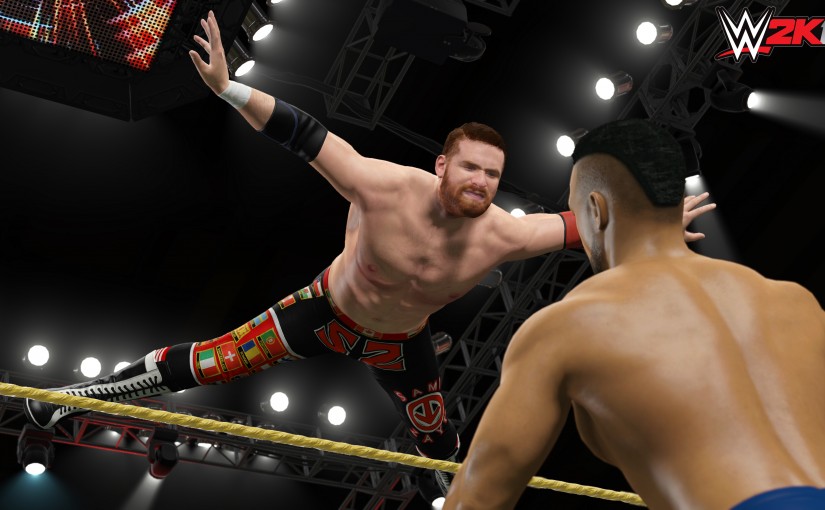 While a little late, we have high resolution images to compliment the news for MyCareer on WWE 2K15 with stars like Adrian Neville, Sami Zayn, HHH, Bray Wyatt and more.

For those who missed the announcement, check out the details direct from 2K on the new mode and then scroll down a bit more for the huge gallery.

Players will begin MyCareer by taking characters they create in WWE 2K15’s Creation Suite to the WWE Performance Center in Orlando, Florida. While there, they will be trained by former WWESuperstar and WWE Performance Center head coach Bill DeMott, as they navigate a series of objectives. Successful completion of the objectives will lead players to compete at NXT, WWE’s developmental system for rising young talent, where they will continue with matches and new objectives. At NXT, they will encounter a roster of new and future WWE Superstars, including Rusev, Bo Dallas, Adrian Neville, Sami Zayn and Corey Graves, all of whom will also be available as playable characters.

After mastering their skills in NXT, players will move up to WWE’s main roster, where General Manager Vickie Guerrero will set matches and keep her Superstars focused through ultimatums designed to gain bonus rewards. Players will develop alliances and rivalries while competing to win spots on WWE pay-per-view events and flagship shows like Monday Night Raw® and SmackDown®. They will also compete for the United States Championship and Intercontinental Championship. Successful players will make their way to SummerSlam® and WrestleMania®, where the WWE World Heavyweight Championship will be on the line as the top MyCareer prize.

Decisions made throughout the WWE developmental process, including alliances, rivalries and social media interactions, will impact player personality traits and crowd reactions. As players progress throughout the mode, they will also have opportunities in-game to upgrade their attributes, acquire new abilities, skills and moves, earn new clothing and unlock managers. These decisions, along with a player’s win/loss record, will lead to multiple branching storylines, surprises, twists and turns that offer significant replay value to explore different career paths.

“MyCareer is a mode beloved by our NBA 2K fans and is a perfect fit for WWE 2K15,” said Greg Thomas, President at Visual Concepts. “We are eager to deliver a comprehensive career mode experience for the first time and consider its inclusion a critical step forward for the franchise.”