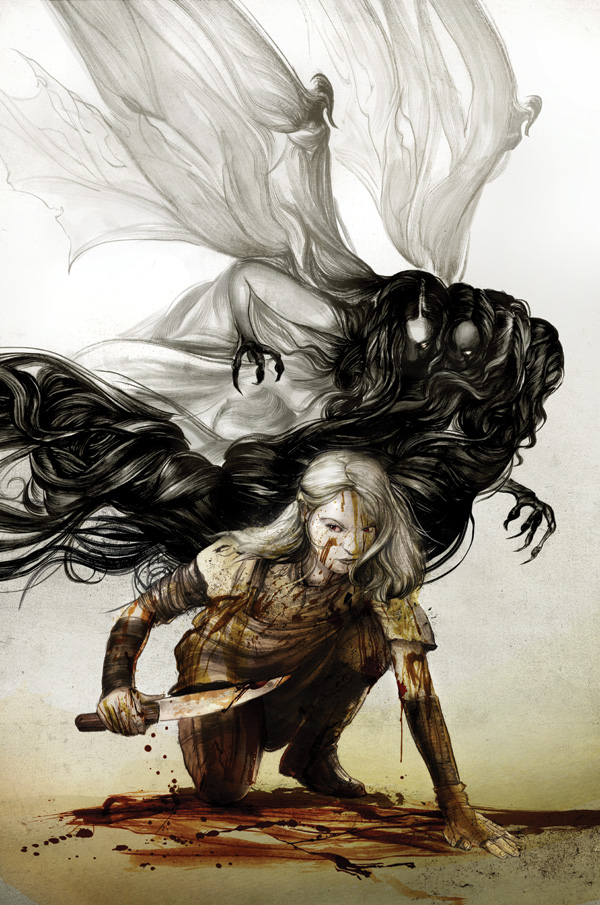 Dark Horse Comics has been on a roll of as of late, today we have a ton of new release information to pass along though.

First up! Dragon Age the digital comic series, we’re getting a 6 part event starting in February 2012 with issues priced at $0.99 each, quite a steal if they stack up to the quality of the Mass Effect releases so far. Readers will be able to follow Alistair, Isabela, and Varric on their latest adventure to Antiva, a land ruled by some of the deadliest foes they’ll face. More information is coming and we should have a preview sometime in January for the book. In the meantime, check out the current art for the book below.

Next we have a new project to be announced next week by Caitlín R. Kiernan of such fame as The Red Tree, Silk, A is for Alien and more. We only have the teaser art for that as well but the image title leads one to ponder if it’ll be a graphic adaptation of her work Alabaster… Check it out with the Mass Effect art and speculate for yourselves.

What happens when Nate Cosby, Evan Shaner and Rus Wooton walk into a room and start cranking out a comic? We’ll find out in Dark Horse Presents #9 with Buddy Cop and more. For those scratching their heads, Nate and Evan worked on The Storyteller and Rus Wooton is from Walking Dead fame. Expect some epic stories and twists in that issue when it drops in February as well.

Finally, Dark Horse Digital is going into overdrive, catch the release list for this month below. Goon fans can rejoice as they crank up the releases for that series too.

Path of the Assassin vol. 1

Serenity: Downtime and Other Half

Abe Sapien: The Devil Does Not Jest #2

Kull: The Cat and the Skull #2

Star Wars Adventures: Boba Fett and the Ship of Fear

Hellboy: House of the Living Dead

Hellboy: House of the Living Dead

Star Wars Adventures: The Will of Darth Vader