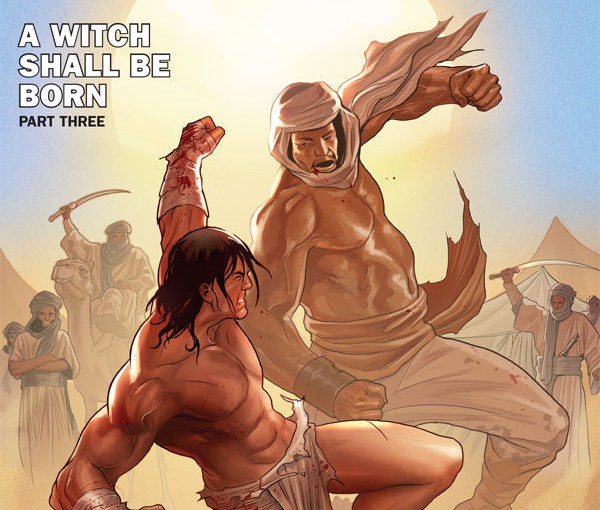 The final arc of Conan the Avenger continues!

In the beginning of issue we see two men Tarek and his brother scavenging the desert and come across Zuagir soldiers one of the soldiers finds a letter in one of the brother’s possession and begins to read it.

Constantius influence on the kingdom and how they have turn it into chaos with Adultery, Taxation and oppression, Astreas of Nemedia sends a letter to Alcemides revealing the destruction Taramis and her mercenaries caused, he gets into detail how about the people are being exploited and the woman ravaged, he then explains how the neighboring small cities are also effected by the chaos, Khauran  a city that is significant in the realm because of its rich farmland is now under the control Constantius and his crazed men, also in letter he writes about the rebellion Conan has started and how that’s been given the people hope, lastly he writes that he thinks Taramis is being control or is a Demon as rumors of her exiting her temple with blazing eyes and covered in blood.

Conclusion: Like I said in the begin of this review this issue has a lot of exposition,  Van Lente does a great job explaining in detail how things have changed in not just the current city but everywhere, his world building is great. 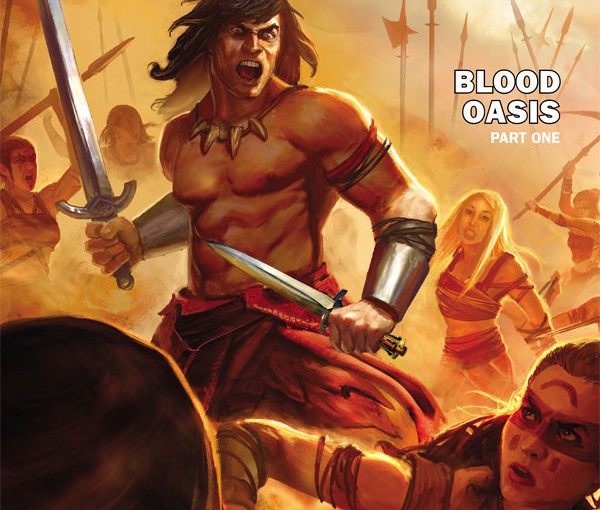 A mysterious oasis with a massive inland lighthouse beckons to Conan amidst the scorching sands. Answering a call for help, he offers assistance, only to realize too late all is not what it seems—he’s stumbled into a trap!

Now free from Princess Thalis of Stygian, Conan and Natala journey through the south desert of Stygian, Natala pleads her frustrations of the pass events and how Conan seemed to not have cared, meanwhile Conan notices a sandstorm and the two take refuge as the storm passes, as the storm passes Conan notices 3 armored soldiers and beings to attack them, under the impression that the soldiers are from Thalis strikes them down, just as when Conan is about to finish one them off, one of them takes off his helmet and introduces himself as Valerius of Khauran.

Valerius tells Conan and Natala that he and a unknown companion are too is looking for the Oasis’s so the two decide to travel together, meanwhile in the shadows we see a man watching from the shadows in nearby desert stone. But it didn’t take long before he was expose by Conan, the man introduces himself as Kerim Shah from Iranistan, he tells them he’s just a traveler on business but Conan and Valerius don’t buy it and Conan states that if Kerim is lying he’ll take him out.

Later on the group finds Akrel the Tower of Silence a well-known temple/castle, at the front of the Tower of Silence a camp that has been set up by unknown soldiers is invested be vultures, as they get closer they see that the vultures are picking at the dead bodies of the soldiers, Conan and the others look around to see if anyone was alive and sure enough they find 3 woman trapped in a cage.

The woman tells them that Raiders had ambushed them and they hid while the raiders attacked, thinking that the raiders are inside Conan decides to enter the Tower of Silence, at the same time Kerim sneaks off and into the shadows again with bow in hand ready to make a move on Valerius unknown companion.

Blood of Oasis Part One starts off with good amount of mystique to it, characters Kerim Shah and Valerius are interesting but the biggest question is who is the other person Valerius is travelling with?, you can see that whoever Valerrius is escorting is clearly royalty, so the question I want answer will most likely be answer in the next issue, but I wonder how important will he or she be to the main plot of the story, and will he or she be any importance to the Oasis’s they all speak of.

Fred Van Lente’s writing is great in this issue, I particularly like how he shows Natala’s snobbish and pamper ways throughout it, Artist Brian Ching deserves equal praise for illustrating those expressing’s in great detail and even the action panels were well drawn and detail making it easy to flow panel to panel.