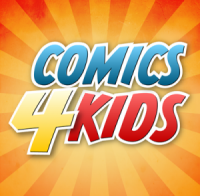 Starting today, it’s easier than ever before to share your love of comics with your kids via comiXology’s newly upgraded Comics4Kids iOS app featuring “parent-friendly sync” among other major upgrades. Parents that have an existing account on comiXology – the revolutionary digital comics platform available across iPhone, iPad, Android, Kindle Fire, Windows 8 and the Web – will find that only their kid friendly content syncs when they log in to the Comics4Kids app.

“ComiXology’s mission is to bring comics to everyone everywhere and a big part of that is making sure kids have easy access to comics. We needed a solution so parents could easily share comics with their kids,” says comiXology co-founder and CEO David Steinberger. “This new Comics4Kids app does that and more. Our “parent-friendly sync” puts comiXology in the leadership position by giving parents control over what their kids read. Combined with our 3.0 platform, this makes Comics4Kids the best digital comics and graphic novel app for kids around!”

In addition to the unique “parent-friendly sync” feature, the Comics4Kids iOS app upgrade brings the app into to parity with the rest of the comiXology family of apps, delivering the same great shopping and reading experience that comiXology is known for.

Users of the older version will find that the Comics4Kids3.1 iOS app sports a sleek, new design and interface that enhances overall stability and usability. The advanced UI enables a near instantaneous launch dramatically cutting down the app’s load times, allowing kids to easily find new content and start reading faster than ever before. In addition to the overall re-design, the app now has new discoverability options, enhanced feature spotlights, more categories for new content, series and storyline listings, and CMX-HD resolution books for users of the new iPad.

To help better organize downloaded comics and graphic novels, “Purchases” now has its own tab so users can always find their comics for quick and easy download without cluttering their “My Comics” area.

Previous users of the Comics4Kids app will be happy to know that while vast improvements have been made, the Comics4Kids app continues to deliver the high quality comic reading experience customers have come to expect from comiXology powered apps through the use of it’s patent-pending Guided View™ Technology; that includes a wide variety of reading options and settings, enabling users to set the speed of transitions in addition to page orientations and much more.

Features and benefits of the Comics4Kids app 3.1 iOS app include:

◦ New “Parent Friendly Sync”
◦ Completely redesigned application
◦ CMX-HD compatibility
◦ Discover comics at much faster speeds
◦ Near instant launching
◦ Background downloading
◦ Improved “Instant Search”
◦ Separate “Purchases” area that displays all owned comics
◦ New series groupings in store and “My Comics”
◦ Buy or continue reading the next issue at the end of a comic
◦ Easily read comics from anywhere in the store.