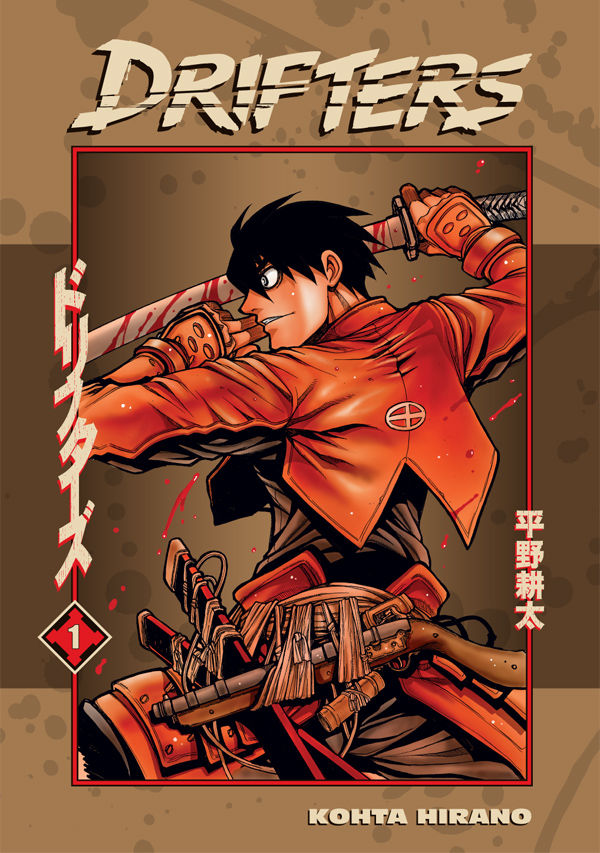 Kohta Hirano is back again, this time with a new foundation for war unlike any other in Drifters, a manga which combines destined time travelers with a fairy-tale world. In it, a war is brewing against the Black King, a figure determined to wipe the drifters from his realm with his own army. O-Toyohisa, Nobunaga and Yoichi have only one choice to engage this new world with all their might and discover why fate has brought them from their respective eras into this troubled world.

With that said, Drifters will take many readers right into the pages of Hellsing in the art style, it reflects heavily to the world that Hirano developed over those years. While Alucard hasn’t jumped into the fray, some of the characters just feel like old friends in their actions and design. The raw force of O-Toyohisa is scary but relentless, seeking only the strongest of his opponents to savor the battle, even Yoichi strikes a tones of former female leads. For those that fell in love with giant guns and epic battles of blood, there is no shortage of that in this world, I would say that it’s just as strong as ever in this first volume. As for taking on new classes and breeds of character, Hirano has no issue establishing his creative power over these new figures and presents them in equal care to the central figures of the story.

For those worried about a slow start to this tale, worry not. The action paces itself throughout the volume, making sure to include only enough to keep readers moving quickly through the event until the next transition hits. Shortly into the manga there are some mysteries revealed to tease the reader about what this whole war is about, to save on spoilers though I’ll avoid talking about it. Just keep in mind that this isn’t a simple dark Shonen story and it seems as if we’ll have many turns ahead in this new world.

For Hellsing fans, this is a series to seriously consider jumping into; for manga fans looking to break from simple Shonen titles… I would say this is a strong contender for your money.  The length, development and potential makes it one that collectors will most likely chase down after the next few volumes hit the streets.