Are you a Dark Horse fan? Are you going to ECCC / Emerald City Comicon this year? You might want to look below for some great info on what they’ll be presenting and who they’ll be putting up on panels this year. You wouldn’t want to miss out on key panels like “Drawing Inspiration: The Art of the Whedonverse” now would you? On to the list!

The Emerald City Comicon Spotlight Series is designed to give you an intimate look into the minds of some of comics greatest creators. This hour, join creator Brian Wood as he talks about his work on Conan, DMZ, Northlanders and many others.

TNT’s epic drama Falling Skies makes its debut appearance at Emerald City Comicon this year. Watch a never-before-seen clip from the season 2 premiere episode and hear from the show’s actors and producers about the new season. Falling Skies, basic cable’s #1 new series of 2011, is set to return this June to continue its extraordinary story about life and survival in the wake of a catastrophic alien invasion. Noah Wyle (ER) stars as Tom Mason, a former college professor and father of three, who has become an unlikely leader for the 2nd Massachusetts civilian resistance group. The series chronicles the chaotic aftermath of an alien attack that has left most of the world completely incapacitated. Falling Skies comes to TNT from DreamWorks Television and is executive-produced by Steven Spielberg, DreamWorks Television heads Justin Falvey and Darryl Frank. Remi Aubuchon and Greg Beeman also serve as executive producers.

Join us for an exclusive behind-the-panels look at the dynamic artwork of Dark Horses Joss Whedon titles, from pencils to inks to colors to print. Dark Horses public relations director, Jeremy Atkins, will lead a discussion with artists Georges Jeanty (Buffy the Vampire Slayer), Phil Noto (Angel & Faith, Dollhouse), Chris Samnee (Serenity), and inker Andy Owens (Buffy the Vampire Slayer) for an inside look at the artists processes. We’ll be showcasing a variety of art from past and future issues of these best-loved titles, including exclusive reveals and first looks!

The Emerald City Comicon Spotlight Series is designed to give you an intimate look into the minds of some of comics greatest creators. This hour, Camilla d’Errico talks about how she made her dreams reality by giving up on the 9 to 5 grind and becoming a full time artist.

When Dark Horse partnered with BioWare to expand the Mass Effect story line into comics, video-game tie-in comics were finally legitimized. Now, Dark Horse is widely recognized as the leading publisher of video-game comics, with launches throughout 2012 digitally and in print. Join us for an hour long preview of what’s to come this year, with exclusive news and announcements on current and upcoming projects with BioWare, Valve, and Activision!

The Emerald City Comicon Spotlight Series is designed to give you an intimate look into the minds of some of comics greatest creators. This hour Uncanny X-Force writer Rick Remender joins us. Rick is also the writer/creator of comics such as Fear Agent, The End League, Strange Girl, Black Heart Billy, Last Days of American Crime, Sea of Red, Sorrow, Night Mary, XXXombies and Doll and Creature.

Just over twenty-five years ago, Dark Horse stepped into the comics-publishing arena with a different agenda. While the publisher has gained much notoriety for its popular licensed titles, like Buffy and Star Wars, one mission remains the same: to give comics top creators a venue for showcasing their work and retaining their ownership of it. Join Dark Horse’s public relations director, Jeremy Atkins, along with a cast of premier talent, for news on all of Dark Horse’s 2012 publishing launches and new Dark Horse Presents stories. Guests include Steve Niles (Criminal Macabre),Steve Lieber (Alabaster), Francesco Francavilla (Black Beetle), Sanford Greene (Rotten Apple), Ethan Nicolle(Axe Cop), Adam Warren (Empowered), Paul Tobin (Falling Skies), and Brian Wood (The Massive), and a few surprise drop-ins!

The Emerald City Comicon Spotlight Series is designed to give you an intimate look into the minds of some of comics greatest creators. This hour, modern master of horror, Steve Niles, talks about what it takes to craft a good horror story, working with artists like Sam Kieth and Ben Templesmith and how his creation of 30 Days of Night changed the face of horror comics.

Ethan and Malachai Nicolle, creators of Axe Cop, will do a live Q&A, show images and videos of new Axe Cop material, etc. Always a fun and highly interactive panel.

From Mage, Sandman and Bone to Fables, Castle Waiting, Hellboy and more, mythic fiction has been a fascinating — and growing — presence in comics. What is mythic fiction? Why is it so popular? And could it really become the next big thing in the comics field? Join moderator Kurt Busiek (Arrowsmith), Matt Wagner (Mage), Rachel Edidin (Dark Horse Comics), Bill Willingham (Fables) and Chris Roberson (Memorial) for a lively discussion about mythic fiction in comics, from its roots to it future.

The Emerald City Comicon Spotlight Series is designed to give you an intimate look into the minds of some of comics greatest creators. Brandon Graham and Adam Warren join you this hour for a conversation talking about finer points of their work. Their western takes on manga have delighted readers locally and abroad. Expect a vivid and lively discussion.

I do have to say, that’s a pretty epic line-up, really wish they had hit Wondercon but we’ll catch them at SDCC for sure this year. 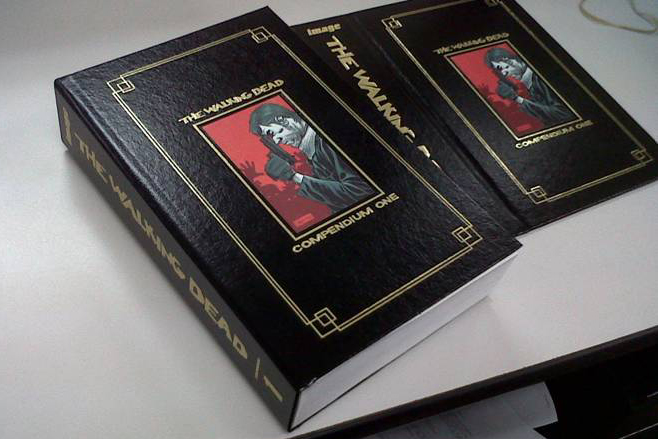 There are many amazing things in the comic world, busts, figures, variants and of course the stories themselves. Emerald City Comicon fans get a taste of something that combines most of that goodness into a timed exclusive shell. The Walking Dead Compendium, it’s enough to make you want to travel to Seattle just to grab it. For those like us who can’t do such a thing, we have some pretty pictures courtesy of Skybound and they really are something to see. While the first shot at this book will only be available at ECCC, the rest should be ready in time for San Diego Comic-Con later this summer.

Details on the release: