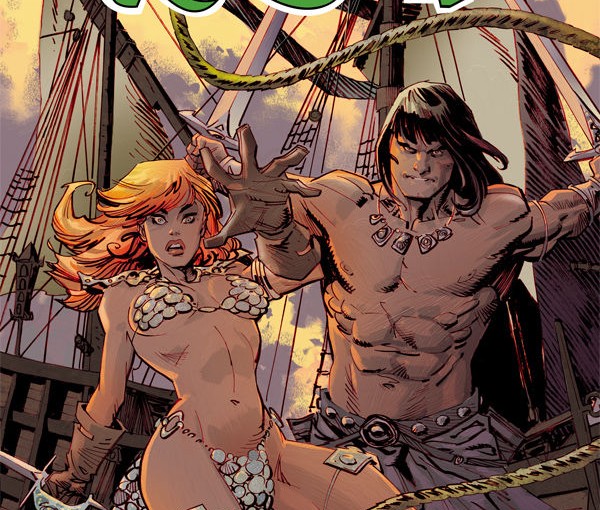 It’s been some time since Conan and Red Sonja’s encounter, and things have change, Conan is now back at sea with Belit, as they sail they come across a neighboring ship passing by, On that ship is Red Sonja and Annisia who think the Tigress is a Slaver Ship and as the twos hip past one another Sonja and company jump aboard the Tigress. Conan and Belit spring into action, with Conan facing Annisia and Belit facing off against Red Sonja, the skirmish doesn’t last long with Conan and Sonja both getting up hand on each other’s opponent. Once Conan realizes that its Sonja he lays down his sword and the four of them decide to catch up, Conan tells Belit about the time he and Sonja met and Sonja tells Conan about how she and Annisia became friends she then goes on to tell him about the oath she made to kill all slavers.

Later that night Conan and company are awaken by a crewman who shows them an island that is covered in Red Veins, the four of them jump on small boats and enter the island. They soon notice that the veins are Bloodroot and it has completely covered the island, the Bloodroot has infected everything even the wild life. After noticing a trail of Bloodroot they follow it to a temple, inside the temple sits the Sorcerer Thoth-Amon who informs them of his plan of unleashing Bloodroot on all the kingdoms, a fight assumes with Conan and company attacking the sorcerer and driving him back, Thoth-Amon then teleports away before he’s seriously injured, but not before promising his revenge against them.

The issue ends with a wounded Thoth-Amon carrying the last single Bloodroot as he walks in an unknown snowy environment.

Final thoughts: While Age of adventure is good issue it does have its flaws, one them being the pacing, Age of Adventure is extremely fasted paced I mean really fast, the other flaw is the fight between them and Thoth-Amon, the way they defeat him was a little too easy to say he’s supposed to be this powerful sorcerer. On plus side again the interaction between Conan and Red Sonja is brilliantly display, at one point Conan and Red Sonja are talking but are insulting each other at the same time as if they’ve been friends forever, Conan in front of Belit confesses that he was surprise how he didn’t end up in her bed because of her beauty, Belit’s reaction to the two of them was clear she was jealous, but not of Red Sonja but of the bond the two have in the short time they’ve known one another it’s reminiscent to her and Conan’s bond.

Although this is a left to be desired type of issue it’s still filled with action which in all honesty is what a Conan and Red Sonja Comic is all about at the end of the day. 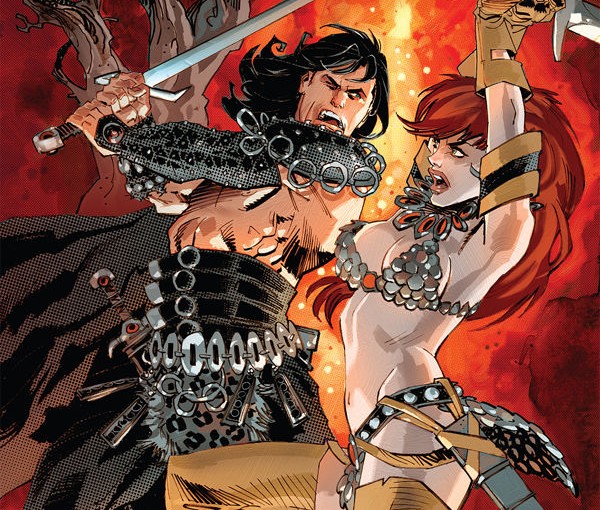 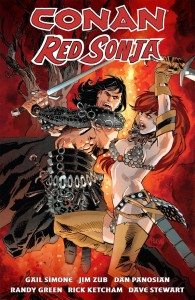 I’ve always been a fan of the epic fantasy genre of comics so when dark announced that they would be teaming Conan and Red Sonja in a series I knew good things were in store, Conan had an unbelievable run in 2014 and Red Sonja has recently jumped into the scene, so teaming the two would only help each other.

Gail Simone and Jim Zub’s, Conan & Red Sonja is nothing short of entertaining, Simone and Zub set the tone right away with its action and fast pacing. In issue #1 Sonja is paid to steal a jewel for a fee, so disguise as a common peasant girl she seduces and tricks a wealth gentle into helping her find the place the jewel is located, next panel the perspective changes and now we see Conan at the entrance of what looks like a secret room, he then proceeds to takes out two guards and walks in only to see Red Sonja sword in hand and at the throat of the Prince, after a brief verbal spat which ended with prince dead the two leave before the guards arrive. With jewel box in hand they set up for the night and everything seems okay until Red Sonja tries to steal the box while Conan sleeps and once again a fight breaks out between the two, the fight ends with both of them agreeing to open the box.

Once the box is open they find out that there isn’t a jewel but instead plant seeds, confused and angry that they have been deceived, they again go at it again verbally, at that moment a mysterious man appears. The man is known as Manus both Conan and Red Sonja were hired by him, he informs them that seeds are called Bloodroot and it will help his master take down any kingdom. Knowing that such a weapon is to dangerous Conan and Red Sonja take the Bloodroots from Manus kill him and drop the roots in a fire.

After it’s all said and done Conan asks Red Sonja to join him on his journey but she refuses saying she will travel alone on her own path.

Final thoughts: This was a very entertaining 1st issue, I especially enjoyed the interaction between Conan and Sonja, and you can tell Conan is drawn to her strength as a warrior more so then his beloved Belit, in there duel Conan praises her skills and strength, he even asks her to join his side not as lover but as warrior, If you’re a fan of epic fantasy genre I suggest following this series and if your fan you won’t be disappointed

Here’s this week’s installment of DC comics Preview Monday exclusives, checkout the first look at BATGIRL #12, BATMAN #12, BATMAN AND ROBIN #12 and FAIREST #6, all in stores this Wednesday. For more info go to DC Comics