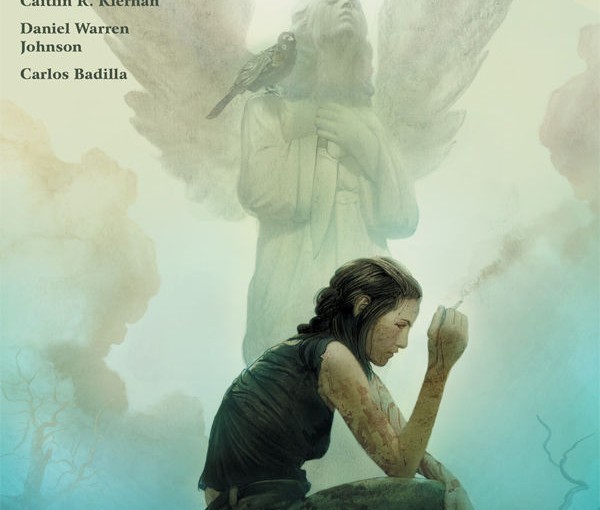 After the death of Dancy, Maisie and bird are hanging at the Old live Cemetery in Selma,

Alabama, they come across an old lady who bird sees as a potential client to con, with Dancy gone Maisie now has to provide for herself without Dancy and performing mediums is one the ways she does for cash. Things get interesting when we jump to Carson and Hunters trailer the two are clearly psychopaths, like a scene in a horror movie the two of them are covered in blood, the dialog between them is interesting it seems that they have plans for Maisie, hopefully in the upcoming issues we see what exactly what it is.

When Maisie and bird reach the old lady form the cemetery’s house, she begins to setup for the medium, as they begin Brid notices that the old lady has a cat which is a big no no for him/her and con ends up a disaster with bird revealing its self, lady freaks out and calls Maisie a witch and throws the both of them out of her house, knowing that the old lady will spread the word of their con the two of them leave the town.

The issue ends on a cliffhanger when two unknown werewolves track down Hunter and Carson, and begin to what looks like an ambush attack thinking the two are just humans.

Conclusion: Alabaster: The Good, The Bad, and the Bird #2 is dark and witty like some of other Dark horse comics, while I haven’t read a lot the previous Alabaster series, I had to do some back tracking to catch up to speed, and as of right now I can’t really say anything bad or good, so I’ll continue to follow this series so can give this series the proper review in deserves. 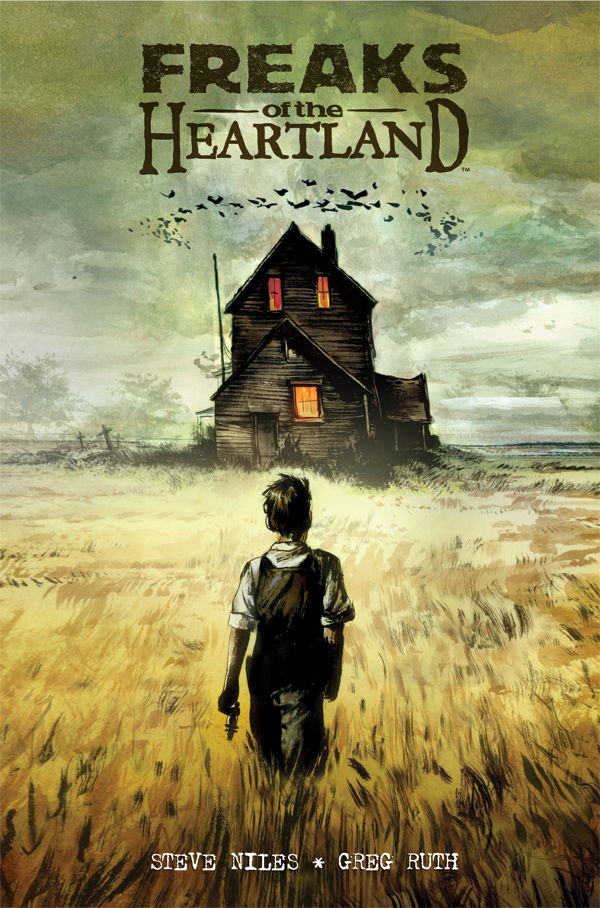 Freaks Of The Heartland is a collection of Steve Niles and Greg Ruth six-issue Miniseries turned paperback. It’s a tale of a rural town in the Midwest of Gristlewood Valley, a place where the townspeople have been keeping a secret for many years. Trevor, a boy who lives with abusive father, a mother who’s deeply distressed and finally a physically deformed little brother Will. The people of Gristlewood Valley see Will as a monster and something evil but Trevor doesn’t see his little brother that way. One day their father decides to kill Will for being what he thinks is a monster, but before he can do it Trevor intervenes and escapes with Will. On their journey they discover that Will isn’t one of a kind, but that all the families of Gristlewood Valley each have a deformed kid that they treated badly. Together, Trevor,Will and others like him leave town to find a place where they can be safe and call home, All the while try to avoid the angry and fearful townsmen.

The Freaks of the Heartland is a well-written story that is very emotionally driven which is something I haven’t seen in a horror story, Overall Steve Niles and Greg Ruth tale is precisely laid out in storyboard format and would have no problem transitioning to a film. If you’re looking f or blood and gore this isn’t the book for you, even though it does have its moments when Will protects Trevor form their father. Besides that section, there’s nothing else worthy of mentioning in the filed of gore and intense violence. The biggest beef I have with the book is that it’s too short with unresolved characters, you really don’t get a sense of closure to the story at the end.

Artist Greg Ruth brings the Midwest town to life using a nice mixture of earth tones throughout the book which is perfect to my tastes, I really enjoy the use of Reds and Orange for the  action pages, Ruth really captures the Midwestern landscape and did a beautiful job re-creating it.

Overall,the book is awesome for none violent horror story,I recommend this book to anyone looking for more than just blood and gore, but for a story that has real emotion and themes dealing with acceptance and discrimination you should give it a shot, believe me when I say you won’t disappointed.