Are you a Corsair fan? If you aren’t you might just have 6 new reasons to consider being one, the company has gone on a press release frenzy pushing new memory products for the 2011 Apple line and new gaming products for their enthusiasts and people who just like really amazing things to look at.

With the K60 the target here is the FPS player, you can tell as it sports a special wrist pad just for the ASDW hand placement and Cherry MX Red mechanical keys across the board and a custom colored and textured set of keys for the ones you’ll abuse the most. For some the pondering will be “what’s the big deal with mechanical keys?” It’s simple though, they prevent the annoying clicks or bumps often found in standard keyboards. Mechanical is always faster response and without worry of a key sticking halfway into a press. 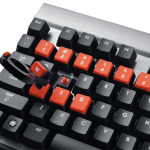 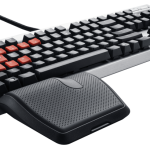 There are a few other perks, 1000 reports per second to make sure your keys no matter how fast you’re pressing get through when you input them. The ability to support anti-ghosting is a relief as it only reinforces the perk of the high polling rate that smooths out all of your inputs. Finally they package it with a key removal tool to swap your gaming keys for normal use and an aluminum body to hold the thing together.

Moving over to the M60, it’s not so radical for changes as it’s fighting in a market flooded with high-end products. The M60 brings 5700DPI to the table so they’re competitive on the precision front and dedicated ergonomics for FPS gaming including a thumb sniper button placed on the side that lowers your DPI in those crucial shots so you’re not fumbling all over. The M60 also sports the familiar weight tuning options that have come up in the past 5 years or so which will prevent any unfamiliarity when handling it,  speaking of that, it also has lift detection to keep powering on while you adjust your mouse. 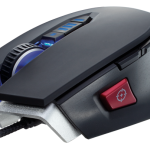 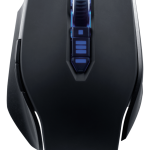 The rest of the features are solid, having selectable response times is pretty standard, solid mass wheels have been going on since the G9 era and low friction pads are basics if you plan to be remotely competitive.

The K90 is another story, taking a cue from popular programmable boards like the G series from Logitech you get a board designed around macro keys and custom calls for MMO gaming. The K90 packs 18 customizable G-Keys allowing 54 functions from 3 swappable banks that can be programmed on-the-fly and activated just as fast. It also packs the Cherry MX Red mechanical keys to make sure that even when raiding you’re never stuck in the middle of an action and can continue to chain up your opponents. 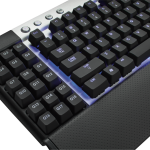 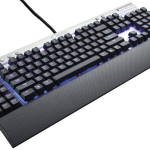 Outside of that the K90 mirrors the K60 with small accents like backlit keys, I’m pretty sure I’m not alone in saying this but FPS players like backlit keys as well, in fact the Auravision and Razer boards used backlit keys for the FPS crowd years ago. Kind of a slight toward the audience but fps players can always sacrifice on the textured keys and grab the K90 instead. Also the board gets multimedia keys on top allowing for the usual volume and control keys you need to get by.

The M90 draws the Vengeance line to a close, the first thing to notice is the full body design instead of the more extreme ergonomics of the M60. That might also be due to the 15 buttons and 9 macro keys placed into the thing, while MMO players do rely on some speed the 5700DPI sensor should be more than enough to carry them through anything a raid can throw at them. Other exclusives include quick profile selections thanks to 6 profile banks in the mouse, a feature that has proven handy to other companies as well. 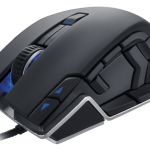 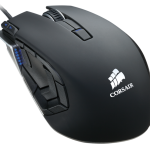 Overall the Vengeance line is set up to compete with the current market and it meets the current bar out there by taking notes from the top groups in PC gaming. A hands on would probably show more but Corsair is very forward with all the work they’ve put into this line making it easy to get a feel for the hardware without even putting hands on it.

Keeping up on your Apple laptop or desktop is a fairly easy task, with so much controlled by Apple they leave you with only the basics to manage on your end. Today those basics get a huge bump in capacity as Corsair unleashes an 8GB and 16GB kit upgrade for your systems. 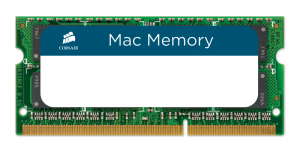 The DIMM’s are able to upgrade the iMac, Mac mini, Mac Pro, MacBook, MacBook Air and MacBook Pro systems allowing users to get enough memory for those demanding video and design applications that gobble up all the memory they can find.

If you’re reading this and jumping at the chance to order, look no further than Corsair or the spec sheet so you order the right part online.

A twelve pack of Billy Joel hits will be available for Rock Band 3 on Dec 14th. Joel had until recently been against lending his music to just about anything but was influenced by an episode of The Office. More specifically, a review of an episode.

No word yet on the track listings but it’s a safe bet that karaoke favorite, The Piano Man, will be among the tracks released for the new keyboard controller optional game.