PC modding is always awesome, today we get a glimpse of how far that can go in Suicide Blitz 2 for Left 4 Dead 2. The mod takes you from the regular map through a series of custom challenges from Portal 2 with GLaDOS dropping motivational quotes to keep you pushing on. To top it off, the maps throw in some good pokes between both series with a number of custom sequences that are fun for all.

Check out the video on youtube of a pair that found this Easter Egg.
Download: Suicide Blitz 2 for Left 4 Dead 2

Killing zombies is a tough task, Cold Stream in Left 4 Dead 2 actually makes that to new levels. Valve is trying to sweeten the deal as the add-on is slated for release, if they can get 20,000 people to survive the onslaught they’ll release Dead Air for L4D2 early on July 10th. Players can beat the campaign on any difficulty to earn the new achievement and help everyone enjoy the goods a little earlier.

Check out the official blog post for more information or jump on Steam and lend a hand. I’ll be in the fight in just a bit as well.

Xbox 360 users:The L4D team has confirmed that the 360 version of Cold Stream will arrive later this summer.

Hopefully these lend a hand in getting through Cold Stream and get you a new badge. Completed it in 49mins solo on hard, well designed but the boundary boxes need work still and the AI enemies and team often get stuck or make really odd mistakes through the entire campaign.

Yes that might be the creepiest header on the site yet, but ignore that! Today the latest DLC for L4D and L4D2 has arrived with new maps and modes for all players. Check out the full sheet below. PC / Mac players can get the latest addition for free while 360 users will get the game later today for 560 points.

“The Sacrifice” is the prequel to “The Passing,” and takes place from the L4D Survivors’ perspective as they make their way South. In addition to advancing the story, “The Sacrifice” introduces a new style finale featuring “Sacrificial Gameplay” where players get to decide who will give their life so the others may live.

In The Sacrifice for Left 4 Dead 1 gamers receive the complete Sacrifice campaign with maps playable in Campaign, Versus, and Survival.

Targeted for release on October 5th, “The Sacrifice” will be available for download on Xbox Live for 560 Microsoft Points and free to all PC gamers.

Ok this time we have a variety of shots from the latest level shown at PAX this year, the game is shaping up really well from the stills and limited video going around right now, hopefully we get a hands on preview as we come into November for the final piece of the puzzle.

Check out the shots below and we apologize for the resize on the artwork, it was 30mb and that’s just insane for a JPG 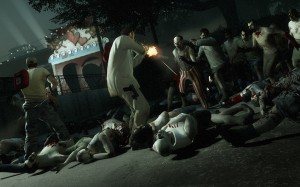 Ok, so we’re not going to PAX this year, but we can bring you a teaser from the upcoming Dark Carnival campaign in Left 4 Dead 2 and a slew of new pictures to enjoy.

I know I said that I had no idea when more info or assets would drop and I really didn’t at the time. Anyway enjoy this and as soon as more videos or pictures come out we’ll have them here.

Sure it has been a little while since Comic-Con and news has been dead but we’re here to kick game back up a little while we wait for the latest info from Valve. Unfortunately future play testing for us does look limited. I managed to get a hands on at E3 and at Comic-Con, but I don’t think we’re going to see a preview build in our Steam list this year as the game has so much attention already. We will have a review once it lands though.

At E3 we hit the French Quarter with guns blazing, health packs equipped and fire axes ready to rumble. The game was fast paced with large swarms operating from multiple angles. The melee option was troublesome and slow with large groups making it hard for one to pull their own weight in a fight. One false move and a player was zombie bait hoping to escape to their friends before they got mowed down.

At Comic-Con things spiced up with the “I hate you so much for this” Mudmen, why do I hate them so much? The reason is simple, Mudmen attack with melee and eventually clog up the screen with a film making it incredibly hard to figure out what you’re doing and in the event of a swarm this means the player has to shove like crazy hoping that in the end their friends will have protected them and that they don’t get mauled in the process as the screen clears up. For some this may feel like a move out of an arcade shooter but really it works in the moment. The other big shift was that the melee in the game seemed to take a back seat, weapons were there but the swarm response seemed slower and staggered for those packing melee special items to allow players to have a chance while maintaining their rules about recharging energy. Lesser attack groups and a focus on accuracy to survive works for the game but really I could do without it, in a zombie outbreak I think it would be funner to let the silly person with the frying pan get eaten while the survivors escape loaded to the teeth with ammo and grenades.

Let’s hope we see some more news for Left 4 Dead 2, right now Crash Course is slated to arrive this September to hold Left 4 Dead players over until the sequel hits this November.

With Comic-Con around the corner and word of L4D2 being on scene with new features I figured it would be nice to drop firsthand impressions that I got over at E3 in the Valve suite.

The game mechanics are always a key focus with these things, the gameplay to L4D is very much preserved from the state of the first preview, gameplay was fast and the hordes were still in heavy numbers from multiple angles, players had decent reload speeds, a good variety of power with weapons and of course melee for when things got dirty. The biggest introduction into the game is the new secondary weapon system, as it stands it feels a bit rough, sure you get really cool weapons to swing around but there’s a lag on the weapon, the gesture is a slightly delayed getting off, the execution is epic but the recharge on the next swing feels like a millenia especially given that these have to be used face to face with zombies. Major attacks upon the player end up causing the weapon to be released and overall it’s just not the most effective way to get out of being violated by a giant swarm right now. They say that they have 20 new items to debut at Comic-Con so we’ll see how that pans out.

Enemy mechanics have changed up slightly, high speed dashes to safety or to turn of sirens or reach safe points are all new, in the stage we played we hit a mid-way safe house to go through before hitting the next branch of fighting, things like that keep the game interesting and let newer players learn how to get their act together by healing in a safe area for the most part, they do have tanks around them or witches, the game also rewards those who run into the fray with a brand new friend. The Charger, a tank like creature dedicated to penetrating breaking your body in ways you never thought possible, is he easy to take down? kinda, if you don’t get drilled by him first as he has the potential to ruin a whole team in a single charge.

As it stands L4D2 is shaping up to be quite an entertaining game, given I have about 350-400 hours on L4D I can say I’ll be looking forward to the next installment when it lands this November unless something terribly wrong happens at SDCC next week.