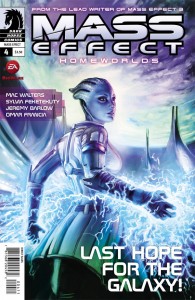 The final installment of the Homeworlds series is here, we jump in with Liara T’soni before the Mass Effect 3 storyline kicks off. Functioning as the Shadow Broker she seeks every shred of information possible to stand a chance against the Reapers. It has become an impossible task for her to find the information that she needs but her persistence and connections are what carry her onward to find even the slightest glimmer of hope.

In Homeworlds #4 we see Liara pushing the limits of her relationships, associations and more and it’s finally wearing on her. We get a sense of her mental fatigue processing so much endless data, we see the juggled commitments and those she’s personally tied to expressing their concern of where this is all going. Although one has to admit, if the entire universe was on the brink of annihilation this wouldn’t be all that surprising or unexpected to come across, it’s just the gravity of the situation hasn’t come crashing down yet. 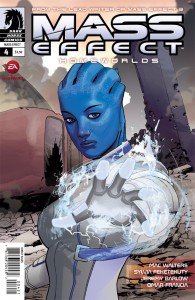 With desperation growing, Liara goes from authority to fresh game, Cerberus may be partnered up with her but it doesn’t take much to signal them to put a knife in her back if an opportunity presents itself. Their own personal quest for information has clashed with her with the Reapers going into higher activity. It’s an interesting exchange and Liara continues to use the knowledge and skills that got her where she is to show who the force is in this deal. For her, burning a few bridges is nothing if it means saving the universe from ceasing to exist, she just gets even tougher and heads forward even stronger than before.

We leave with her story going straight into Mass Effect 3 and conclude this arc of Homeworlds stories.