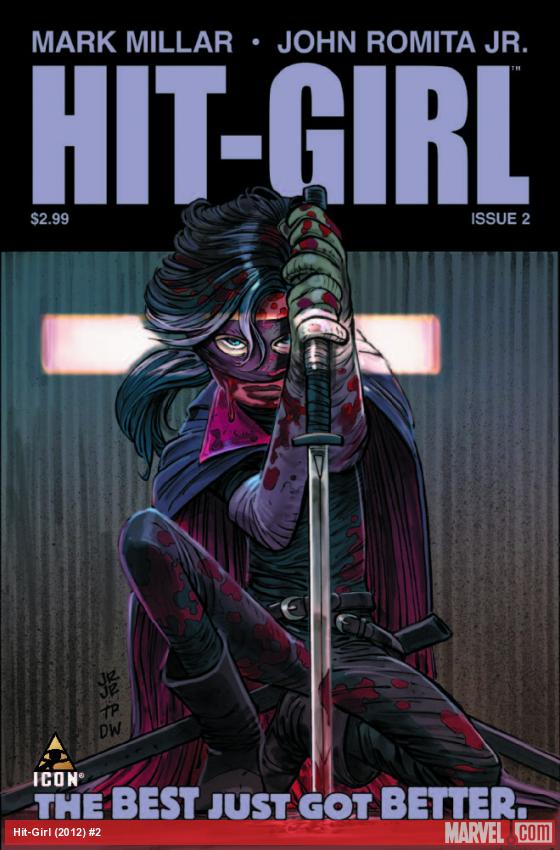 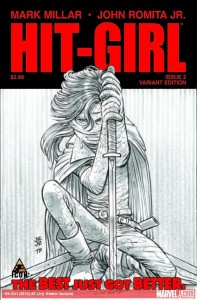 Hit-Girl issue 1 introduces a new rise in crime and the need for the hero duo to return to the streets. We see a slew of new criminals and it’s Hit-Girl who declares to Kick-Ass that a return to the streets is inevitable. In issue 2 she takes him under her wing to train him in the art of being a Super Hero and they set into the training music, well… there is no training music but you can imagine there’s something incredibly cool going on there.

As a crash course it’s a shock to see Kick-Ass really grow a pair in the issue, it does help defeat the issue of him hesitating in action situations that she’ll present. Of course this isn’t to say everything goes off without a hitch, Marcus is of course onto Mindy and dead set on her dropping her old ways to ensure they all have a happier and normal family life after all this time. Unfortunately the roofies kick in and his concerns go out the window as she sets off in full gear for a real test of all the training she’s put Dave through. 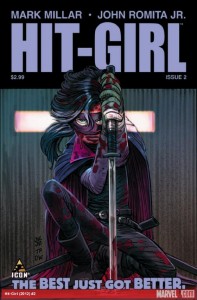 Unfortunately as well as he might do, there’s always the unexpected and in this case the old forms of absolute death came swinging through. It seems that old habits die-hard and Kick-Ass will have to adapt to her style of getting things done versus his more noble version. The clash will likely keep pushing through as Mindy attempts to battle her way into social circles to better function in her cover identity at school.

As a whole, issue 2 of Hit-Girl brings tons of action, drama, swearing and great moments of this new duo bonding as heroes and still able to bicker over the little things. On top of that, Red Mist shows his face and moves to set the spotlight on himself for this act, it’s showtime for the Super Villain movement and it looks like all chaos is about to hit the city as they find the opposing force to this push for justice and peace. Unfortunately the climax leaves one begging for the end of August to roll around to find out where this is all going.