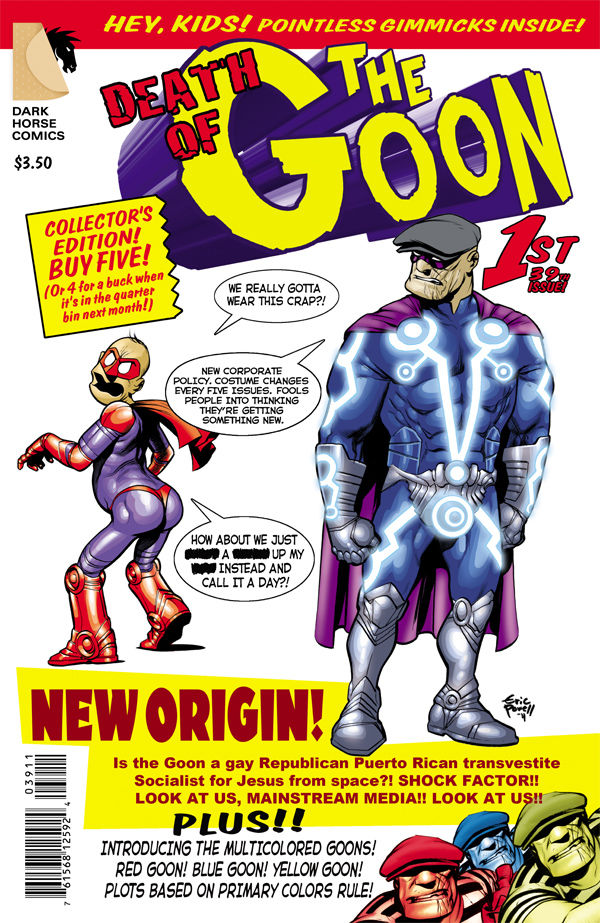 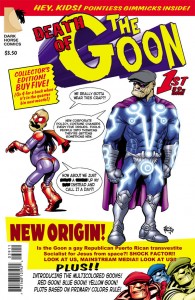 In light of recent debates about creator owned comics, Eric Powell has decided to give us a new issue of The Goon highlighting some of the lengths creators have to go to in order to compete with the big company owned comics. Before even tearing (I don’t advise tearing your comics) into the new Goon issue, you are treated to an amazing cover. The cover is brightly colored, funny and offers a satirical take on a formulaic approach to some comics (specific companies and events shall remain nameless). In short, it’s awesome! The cover asks “is the Goon a gay Republican Puerto Rican transvestite Socialist for Jesus from space?” The answer: sorta, kinda, sometimes.

This issue focuses on the Goon’s origin story. Throw out everything you think this is going to be; actually, if you’re a Goon fan then you’re probably on the right track so go with it and then triple it! We see the Goon and Franky like never before, super cheesy, in primary colors and way into fashion. We are treated to some back story on the Goon, which is continually changing throughout the issue. While the Goon and Franky are on a mission to save the damsel in distress, we meet the bad guy, we see some action and we are given a plot twist at the end. Pretty standard stuff, except it’s totally not, it’s unbelievable. I don’t want to spoil anything but I will tell you that the Goon army is where it’s at. Best. Thing. Ever.

This issue needs to be read and re-read to be fully appreciated. It was beyond incredible. Eric Powell is poking fun (understatement) at the comic industry, doing it unabashedly and nailing it with a super powered, heavy-duty nail gun! It made me laugh (not cry this time) a lot. I’m about to go on my “Eric Powell is the greatest ever kick” so bear with me for a sec. The guy’s amazing. The writing and art should frankly be what ALL other things are judged by. Okay, that wasn’t so bad, what I’m trying to say here is buy it, read it, marry it, do whatever you have to do to get it, (you could probably just go to your local comic shop or order it online) just do it immediately!

Release Date: April 25th, 2012
*It was also just announced that The Goon will be published monthly!