president of the world | BAMFAS 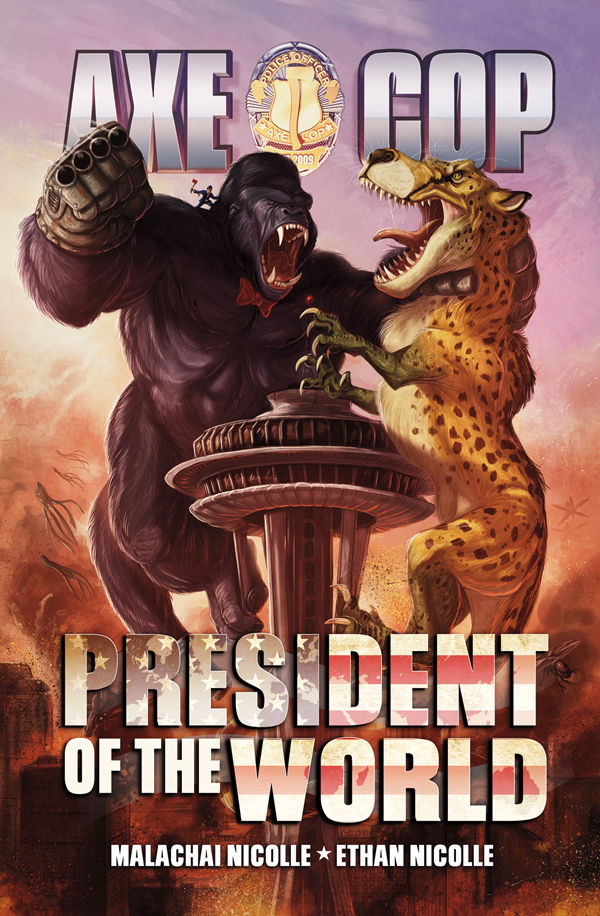 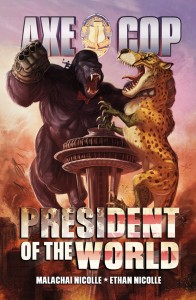 The last time we saw Axe Cop he had Goo Cop (a man made of goo) and Junior Cobb (a bow tie wearing gorilla) by his side fighting off all the bad guys. This issue begins with us meeting two bad robot brothers, Bu and Tu, from another planet. These guys are looking for trouble and won’t stop until they find it. Back on Earth, Axe Cop and his crew have their hands full as they meet the new super weird mash-up bad guy, Chee-Rex. I’ll let you use your imagination with this one! After some mouth springs, giant punches and transforming robots, Axe Cop and his friends save someone who could arguably be their biggest save yet; but, it doesn’t end there, oh no, theirs plenty more action. The evil robots devise a plan to make Earth’s citizens believe that Axe Cop is evil while also traveling through the universe destroying planets and picking up allies along the way to complete their evil plan of becoming the worst bad guys EVER! Axe Cop, refusing to sit back and let the robots win, devises a plan to figure out the robots plan and it’s a doozy. The universe is in peril and it looks like it’s only going to get worse!

Robots, the Devil, golden mustaches, there is nothing this issue doesn’t have. Seriously, it’s all in here and it shouldn’t be so entertaining but dammit it is! The next and final installment of “President Of The World” looks to be crazy and Axe Cop and his friends are going to have their hands full. This comic has so much charm and humor it’s unbelievable. Everything in this issue works, the writing is always funny and the art is really great, so much so that you can actually follow the story even if there weren’t any dialog, that’s pretty impressive. This is a must read and can really be enjoyed by anyone of any age. Don’t miss on Axe Cop, in a word its brilliant! 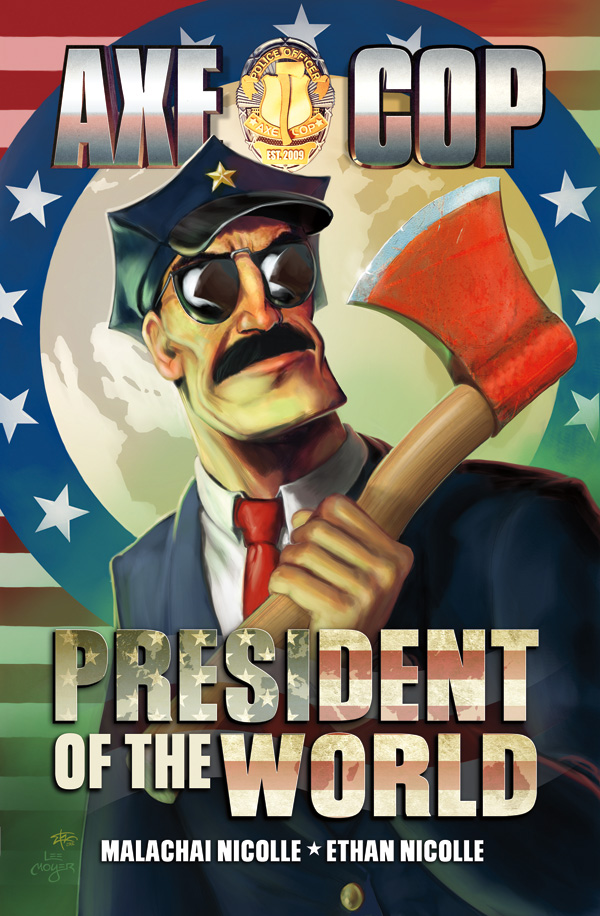 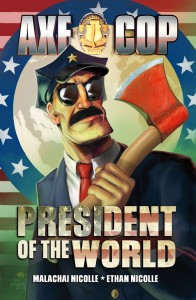 We’ve seen the mass compilation releases of Axe Cop flowing in, this weekend at ECCC 2012 we got word that Axe Cop is setting sights on higher position though and it might not even be planetary. Axe Cop at the peak of power following Bad Guy Earth has only one direction left to go and we’ll see it this summer.

As commander of the whole world it’s a tough place for Axe Cop, the bad guys are out of the picture there’s only one frontier left to venture into, space. Yes Axe Cop is taking the fight for justice to space and everyone better watch out. It really is a tale we could only find from such a young mind. There is a key thing to note, this is a pretty noble effort to make it a continuation and not just a sequel comic so expect the same awesome fights, story and other elements that make this a priceless series.

For those wondering, you only have to hold out for a few more months, Axe: Cop President of the World #1 heads out on July 25th, 2012 from Dark Horse Comics. We’ll have more details on the book and our early coverage when we get closer to that release. In the meantime, enjoy the poster art for the book.