Hey everyone, SDCC is slowly fading into the mist at this point and honestly it has taken a while to reach a point of editorial commentary. SDCC for the past 4 years has been pretty epic, watching it just boil over from a major event into a AAA showcase for the comic, movie, tv and gaming industries was awesome. What sucks is everything that came with it, SDCC exclusives are sought after by many and were a unique staple of the show. Now vendors come to the show or buy large volume to supply their stores at the con leaving low supply or excessive lines to regular consumers.

The crowds in the prior years were a bit friendlier as well, although of course last year there was the whole stabbing thing that went down. Striking that up to crazed fandom is probably the best I can do to class that one. This year not only was the floor packed but it was a shoving match from poor mannered folks to people that were shoving around in retaliation to the aggro behavior. Not cool at all and it really made for slow travel from end to end, for past visitors any extra time to that trek is a downer. 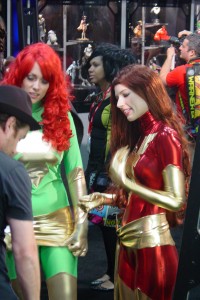 There are upsides of course and I’ll sprinkle one in right now, the quality of the cosplay and the endurance of the people taking part was superior in 2011. I loved watching the costumes around the show and seeing the creative poses and dedication to the public at large asking for shots. Lots of respect to those who made that venture, as a cosplay fan myself it’s never an easy task with heavy fabrics and shoes from hell. Many made it seem almost easy.

The dealer area seemed to show new life in 2011, while the Golden Age comics took an unexpected growth spurt the area as a whole had much more to offer for goods. Finding classic figures, new figures or even marked up show exclusives was easier than past years just due to sheer volume. Many retailers were also determined to run fire sales on old stock seen in previous years, watching some drop as much as 60-70% off had many buried in each booth to complete their collections or start new ones. 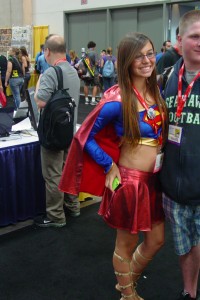 Personally, I found a good home with a few retailers, Comic Madness got me into the latest installment of Wolverine from Marvel. Hoping those turn out good. Also started on Secret Invasion finally with a huge variant pack I got for cheap. Although having 1-2 variants of each issue seems a bit odd now. Others made their impact as well, Top Cow and 2K Games actually set me up with a Darkness II limited Darkling statue from a Twitter event. For comic collectors, gamers and TV and movie enthusiasts there was a bit for everyone.

Now we go back to probably one of the most disappointing facets of SDCC 2011, the panel lines were probably the single most absurd thing on the planet. The waiting times were huge for everything, entering Ballroom 20 wasn’t something you just did, you planned extensively and camped that line for a glimpse of that room. Hall H was much the same with huge lines for major releases and determined fans sitting it out for days in line. The problem is, many of those who waited had no interest in those other panels they sat through. Waiting instead for special tickets or panels at the end of the day. The system used to work, it took roughly 1.5-2 hours to get inside but it happened. Some were waiting as long as 5 hours to see a panel and never got in. 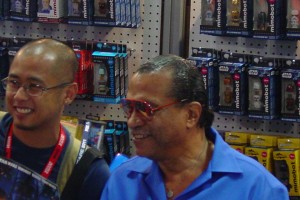 The team at Comic-Con International has an issue to tackle with that situation, as it stands, very few will be able to see the panels they want to catch. I was fortunate to see Being Human and Community which rocked in the Indigo Ballroom. But only because blitzing in as early as possible to line was how it happened. Maybe it’s time to make lines for individual blocks of panels instead. As it stands there are a lot of campers who stomped good experiences for regular people who wanted to see their favorite panels again this year. Step it up for the fans and do something about the squatting because it let many people down.

The question of course, was SDCC worth attending? Yes, combine the downtown events with all the screenings and premieres and the show even if you can’t get into the main event is really a fun time. If you’re attending SDCC itself on top of all that, the event is more than most can handle, attending all the panels even when things were normal was impossible just because there’s so much to do. You can see some panels on your favorite shows, get signings in the exhibition hall from your favorite actors, animators or illustrators and more. It’s mind boggling for those attending their first year and rightfully so, the convention itself is gigantic and spills over to the surrounding area with goodies for all.

Atom.com is hitting Comic-Con hard this year with screenings of new shows and new returns. Legend of Neil – Season 3 and The House that drips blood on Alex will both be screening with panels at SDCC this year.

Details on both events:

The House That Drips Blood On Alex” Screening And Panel On Saturday, July 24

“Legend of Neil – Season 3” Screening And Panel On Saturday, July 24