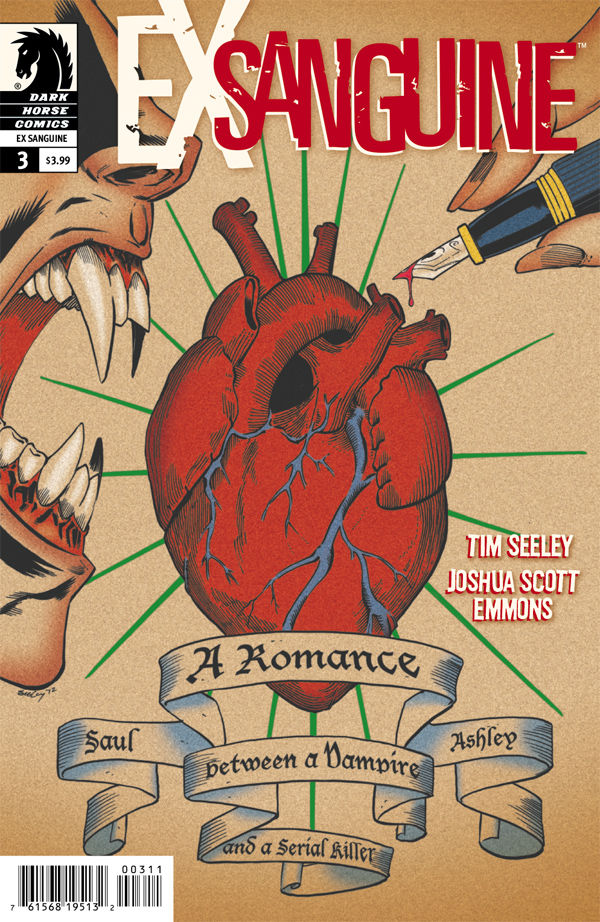 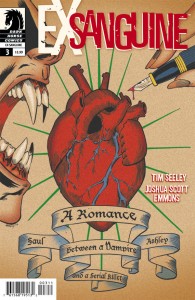 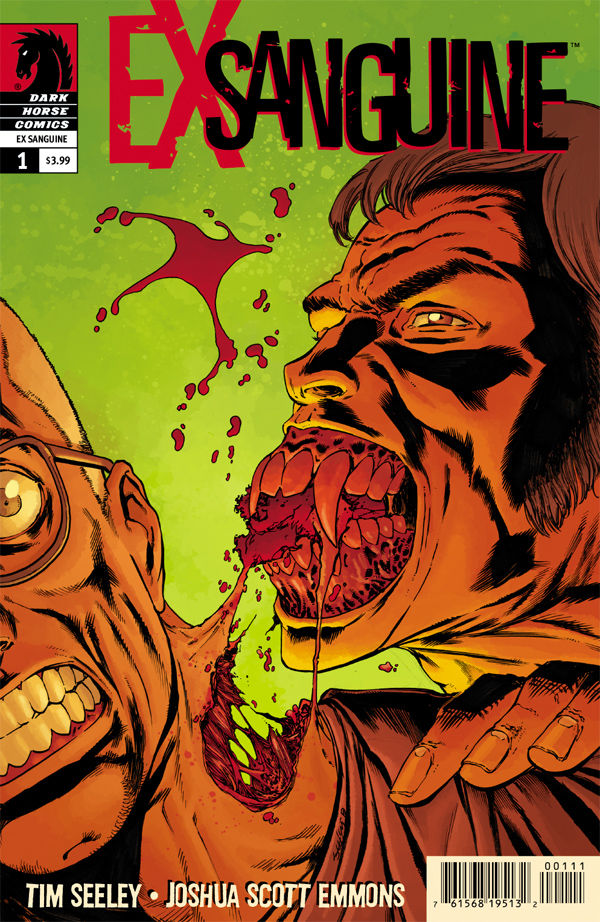 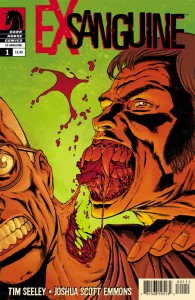 Saul Adams is a man who has a long history on this world, what kind of history is a bit of a mystery but it’s there and boiling to the surface in a turn of events to a world which he thought he had pinned for constants and reliability. Unfortunately a new darkness is making his town their new home and his familiars their prey as well. We only get a glimpse at this breach but it’s beyond anything this city and the feds have seen or known and it’s only the beginning.

Seeley and Emmons dive into crime drama, cults and the supernatural and deliver it in a single serving that drives up questions and shock as the story unravels. Saul is a man lost in his own world, not sure what year it is or even who he is but that after eternities have come and gone that he’s still here and getting by. This story may start off with an obvious twist, but it takes all the expectations and hurls them into the garbage bin in an instant. Saul is about to get some company in his life and it’s going to get ugly for everyone in this story, you don’t rock the boat of an immortal with arrogance and attitude and just get away with it.

Tim Seeley delivers excellent style and emotion to the pages of Ex Sanguine, the expressions, gestures and lapses are superb, it’s always rewarding to see artists that take the time to think out facial actions and even eye gestures before just laying it out there. When the mental flashes hit, the examinations and even Saul’s frustrations strike, they’re all executed with that extra bit of thought. My only dispute is that Seeley almost highlights our unexpected other supernatural force because the shift in style that happens. You can’t just deliver a massive change in color and detail and expect it to slide under the radar.

Other than that small issue, Ex Sanguine is something I’d love to see more of and I can’t wait until issue 2 arrives. It’s well restricted and doesn’t move to jump the shark with transformations and spells and random campy features, it’s cold and real and it captures your attention even though the story itself begins so vaguely. Issue 1 delivers many carefully selected mechanics and uses them at just the right time. Personally it’s a bit sad to see Saul suffering after such a long time as an immortal but it’s understandable that his brain would be overflowing with history.

Saul’s next battle kicks off in issue 2 and he’ll be attacking 2 fronts at once, be sure to read up on this story before just jumping ahead and hoping for the best, you’ll only rob yourself of a great story by doing so. 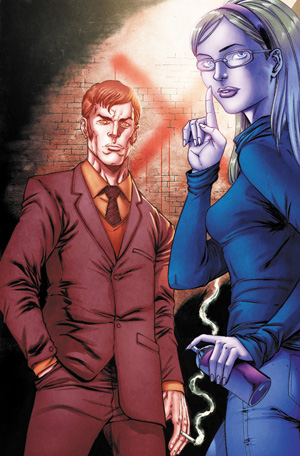 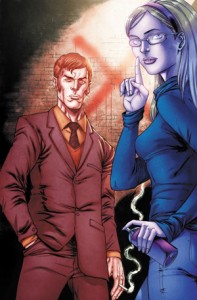 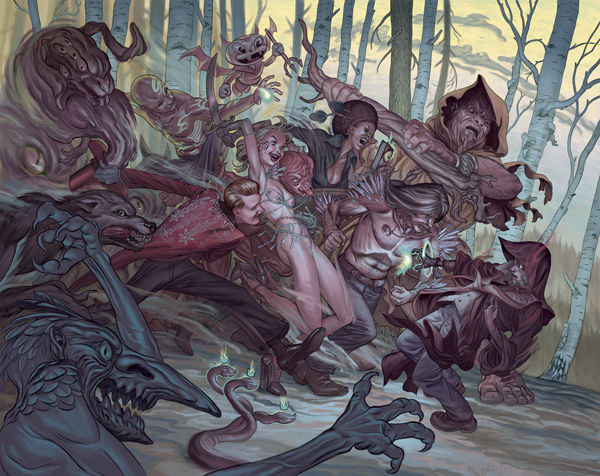 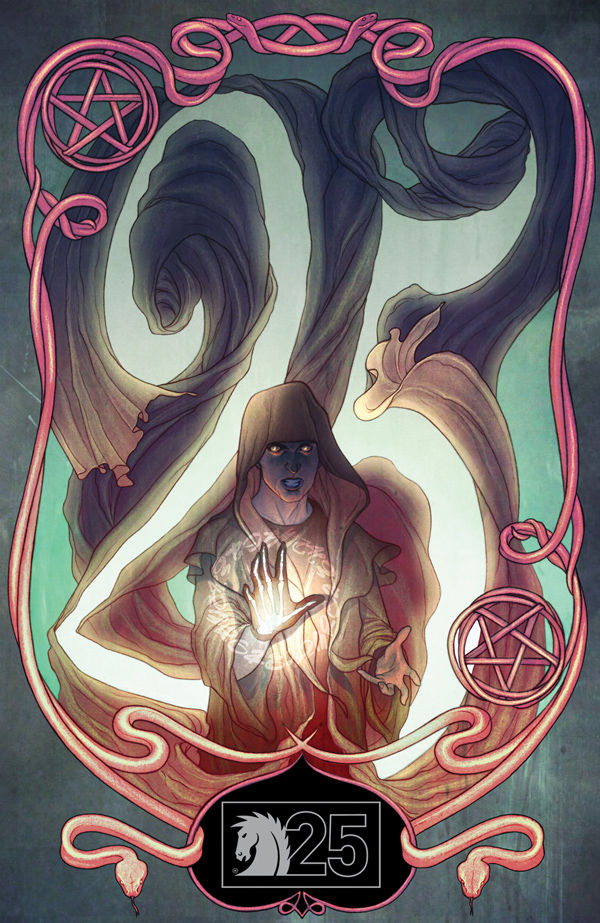 The Occultist begins by introducing us to a man who appears to be a little paranoid.  We quickly find out that his paranoia is justified, the women he invited over turns out to be a demon, monstery type creature who eats and kills him.  Before this happens however, we learn that he is, or was, the Occultist.  Due to his demise a new Occultist must step into the now open position.  That someone is Robert Bailey.  Robert is your everyday typical college student, and this is the typical story.  Boy lives life, otherworldly forces are at work and pick boy, boy has no idea what is happening to him and everyone who does know only tells him information in bits and pieces.  He worked at a bookstore for a man named Mr.Elder.  We learn that Mr. Elder appeared to be a kind of mentor to Robert, but Mr. Elder has been killed.  He has since appeared to Robert posthumously and tried to guide him but did so in a cryptic, unhelpful kind of way.  We find that Robert is being guided by the Sword, which is a mystical book that Robert doesn’t really understand.  As the police investigate Mr. Elder’s death they make their way to Robert, who when the questioning becomes tough, uses the Sword’s mojo on the detective, this works successfully for him, but not so much for the poor detective who’s brain appears to have short circuited a little bit.  Unfortunately for Robert, everyone else also seems to understand how critical the Sword is.  He ends up with bounty hunters after the Sword and in the process of their search they will stop at nothing to get it, even kill him if necessary.  The bounty hunters are after the book, Robert’s after the truth and the cops are after Robert.

This comic is good, as is the art and colors.  This issue does a good job of giving some context and backstory for forthcoming issues.  The dialog is good, it made me laugh a few times, which truthfully I didn’t expect.  Overall The Occultist was entertaining,  it has an interesting premise and was enjoyable to read.