Nerdist folks will be hanging out throughout the weekend, please make sure you check out there panels down below!

The Indoor Kids – The Indoor Kids is a Nerdist Industries podcast about video games, sure, but it’s also about all the other things that keep us from frolicking in the sunshine – games, movies, TV, books, apps, and more! Come watch as comedian/actor Kumail Nanjiani (Silicon Valley, Portlandia, Adventuretime) and writer Emily V Gordon (Flower Deranger) bring their podcast live to you at Wondercon! With special guests Kevin Pereira (Attack of the Show), comedian Jordan Morris and more!

James Bonding – Who doesn’t love 007? James Bonding is the podcast where everyone’s favorite MI6 agent gets analyzed and discussed by Matt Mira (The Nerdist Podcast, Attack of the Show) and Matt Gourley (Superego, Drunk History). Come watch as the pair get into the ultimate debate of who is the best double O alongside a panel of fellow Bond lovers fighting for their James.

Nerdist News Live – Jessica Chobot (Mass Effect 3) and the Nerdist News team will catch you up on the latest in movie, TV, comic book, gaming and tech news. The Nerdist team is going to break down the days’ news, interview guests and then turn some of the questions (and jokes!) over to you.

The Nerdist Panel – Join Chris Hardwick (Comedy Central’s @Midnight, AMC’s Talking Dead) and some very-relevant-to-your-interests talent from across the growing Nerdist Empire. Chris and friends will engage in lively conversation about the big things to come for Nerdist in the near future. Surprises, big announcements and, of course, quemments await!

Cosplay 101– Come explore the ins and outs of cosplay with the fabricators and cosplayers leading the way. Join Chloe Dykstra (SyFy’s Heroes of Cosplay) and Johnny Wickham (JustCos, Cosplay Confidential) as they find out how some of the best cosplayers around the world create their looks, exploring fabrication, design, and character. Are you a cosplayer? We want to see it! Come show off your work! 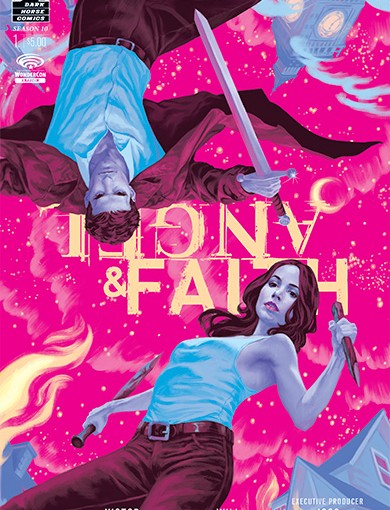 First up, Dark Horse brings an all-new variant cover for a critical hit and fan favorite, Buffy the Vampire Slayer, with an exclusive Season Ten first-issue cover by Tomb Raider art director Brian Horton! Limited to 1,000 copies, these are sure to be scarce!

Second is a variant for Angel & Faith Season Ten #1, by Buffy cover

artist Steve Morris! Again, with only 1,000 copies produced, these will go fast!

These two special WonderCon exclusives will retail for $5 and are limited to five per person.

Legendary artist Stan Sakai has done a special cover for the upcoming The Witcher, a canonical tie-in series in the world of the Witcher video games, which have collectively won over 250 awards and sold more than 5.5 million copies worldwide! All proceeds from the sale of this limited-edition variant will benefit Stan and Sharon Sakai.

Art Baltazar and Franco bring you the characters that sprung from Mike Mignola’s imagination, with an AW YEAH twist, in Itty Bitty Hellboy! A limited-edition hardcover is available at WonderCon for $20, while supplies last!

The Last of Us: American Dreams, from Faith Erin Hicks (The Adventures of Superhero Girl) and Naughty Dog’s Neil Druckmann, collects the comics that are the official lead-in to the game. This limited-edition hardcover will first be available at PAX East this weekend, and then in very limited quantities at WonderCon for $24.99. 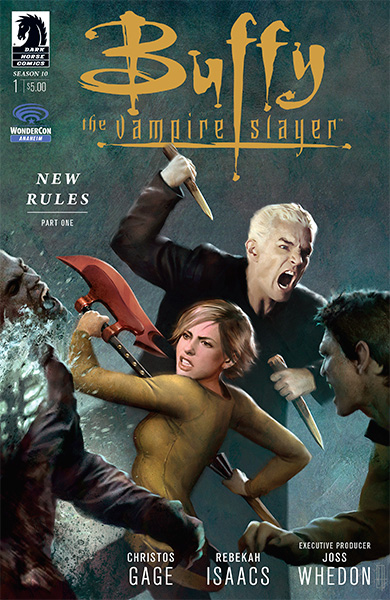 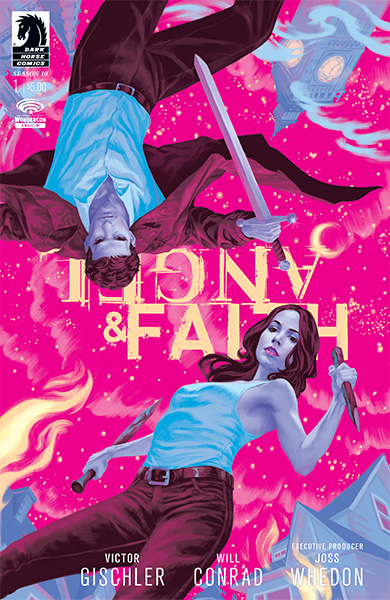 TNT IS Bringing three of its Action-packed Summer Series to Anaheim WonderCon on Saturday, April 19 .

The Last Ship , TNT’s new Action-Adventure Series from Executive Producer Michael Bay, Will round out the day with stars Adam Baldwin (Firefly, Chuck ) and Travis Van Winkle ( Heart of Dixie ), Along with Showrunners Hank Steinberg (Creator of Without a Trace, The Nine ) andSteven Kane ( The Closer ).

TNT’s epic drama Falling Skies – from  Amblin Television  and Executive Producer  Steven Spielberg-. Tells the Extraordinary Story about Life and Survival in the Wake of a catastrophic Alien InvasionNoah Wyle . stars as Tom Mason, a College Professor who Became an unlikely Resistance leader Moon Bloodgood Dr. IS. Ann Glass, a Pediatrician who Became the Survivors’ primary physician and fell in love Eventually with Tom. Will Patton IS Colonel Weaver, the Gruff and Emotionally Scarred Commander leading the Battle Against the invaders.   Also starring in Falling Skies Are Drew Roy ,Connor Jessup ,  Maxim Knight , Colin Cunningham , Seychelle Gabriel , Mpho Koaho ,  Sarah Carter, Doug Jones and Scarlett Byrne . Since Premiering as Basic cable’s # 1 new Series of 2011,Falling Skies HAS Ranked as One of the Top 20 Original Series on Basic cable with Total viewers and key Adult demos . In Addition to Spielberg, Falling Skies IS Executive-Produced by Amblin Television Heads Justin Falvey and Darryl Frank , Along with  David Eick and Greg Beeman .

Screen Actors Guild Award ® winner Sean bean ( Game of Thrones , The Lord of the Rings ) stars inLegends , TNT’s new, suspense-filled drama based on the Award-winning Book by Master SPY novelist Robert Littell . bean plays Martin Odum, an undercover agent working for the FBI’s Deep Cover Operations (DCO) division. Martin has the uncanny ability to transform himself into a completely different person for each job. But he begins to question his own identity when a mysterious stranger suggests that Martin isn’t the . man he Believes himself to BE Legends Also stars Ali Larter ( Heroes ) as Crystal Quest, a fellow operative who HAS a history with Martin; Morris Chestnut ( American Horror Story , Nurse Jackie ) as Tony Cimarro, a smart, Quick-witted and Charming DCO agent; Tina Majorino (Grey’s Anatomy , True Blood ) as Maggie Harris, the Newest member of the DCO team; Steve Harris (The Practice , Awake ) as Nelson Gates, the Director of the DCO Task Force; and Amber Valletta ( Revenge ) as Sonya Odum, Martin’s ex-Wife; and Mason Cook ( The Lone Ranger .) as Martin’s pre-Teen Son, Aiden Legends IS Being Produced by Fox 21 , with Howard Gordon (Homeland , 24 ), Alexander Cary ( Homeland , Lie to Me ) and Jonathan Levin ( Charmed ) and Brad Turner ( 24 ) serving as Executive Producers, Along with Showrunner David Wilcox ( Fringe ). The Legends pilot WAS written by Jeffrey Nachmanoff ( Traitor ), who Developed the Story with Mark Gordon ( Criminal Minds ) and Mark Bomback ( The Wolverine ). The pilot WAS directed by David Semel ( American Horror Story ).

This Summer, TNT IS going to Take viewers on an Action-packed Ride with the Exciting new drama Series The Last Ship , starring Eric Dane ( Grey’s Anatomy ) and Executive-Produced by Blockbuster filmmaker Michael Bay ( Transformers ). The Last Ship Opens with a global catastrophe That Nearly Decimates the World’s population. BECAUSE of its positioning, the Navy destroyer USS Nathan JamesAvoids falling Victim to the Devastating tragedy. But Now, Captain Tom Chandler (Dane) and his crew MUST Confront the Reality of Their new existence in a World where They May BE Among the Few remaining Survivors. Rhona Mitra ( Strike Back ) plays Rachel Scott, a strong-willed, Intelligent and fearless Paleomicrobiologist Assigned to the Ship. Adam Baldwin ( Firefly , Chuck ) IS XO Mike Slattery, a Former Homicide Detective and Chandler’s Second-in-command. Also starring in The Last Ship AreTravis Van Winkle ( Heart of Dixie ), Charles Parnell ( Pariah ), Christina Elmore ( Fruitvale Station ), Sam Spruell ( Snow White and The Huntsman ) and Marissa Neitling ( Leverage ). Based on William Brinkley’s popular novel, The Last Ship Comes to TNT from Bay’s Platinum Dunes and its partners, Brad Fuller and Andrew Form , Whose Credits include the upcoming Teenage Mutant Ninja Turtles . Bay, Fuller and Form serve as Executive Producers, Along with Showrunner Hank Steinberg ( Without a Trace, The Nine ), Steven Kane ( The Closer ) and Director Jack Bender ( Lost). Steinberg and Kane wrote the pilot Series, Which WAS directed by Jonathan Mostow ( U-571 ). 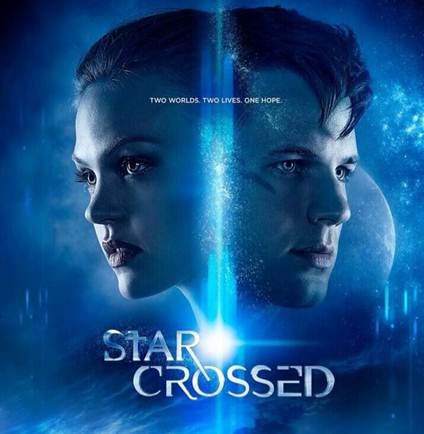 Come join the stars and producers of The CW series STAR-CROSSED for an exclusive screening of an upcoming episode followed by a cast Q & A. The cast will choose one lucky fan from the audience to name a star after!