I stumbled across the greatest team up in documented history. Pb and J are blown out of the water by This completely awesome pairing.

Of course I am talking about Hasbro and Marvel.

Anyone born in the 80’s was raised on a steady diet of ghost busters, transformers and GI Joe. Of the three, GI Joe by far had the most action pose potential. Marvel toys were never the most agile of figures. They moved like they had all four limbs in a cast. And then over starched their undies.
For years kids just used the Joes and pretended they were comic heroes.

Hasbro had the GI Joe license and the Marvel line was handled by Toy Biz. Hasbro had the superior play quality and Toy biz had the detail…  but it was like playing with a detailed block of wood. 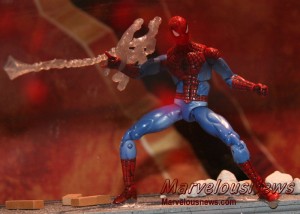 Look at that maneuverability! 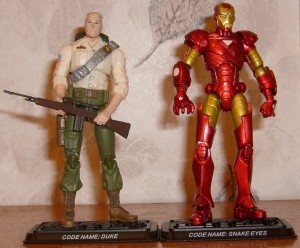 Iron-man and snake eyes? Cobra might as well pack it in.

That is a very nice first wave to start your collection. Finally Iron-Man can take down cobra!