It’s been a while since the game came out, but it’s a bit of a cornerstone to Wii gaming, for older audiences the game is slapstick madness in the sense that it’s completely violent and it makes no apologies about it, the game is designed as a mature 3rd person fighting title that grabs it’s rating of M and rides the wheels off of it.

When the title came out it was surrounded with TV questions of “would you buy this for your child?” “do you condone your child playing this?” and so fourth, the issue was that the game wasn’t designed for children and better yet it only proved that parents should be doing their job and researching what their kids beg them for. It was like a sense of whiplash to the parents finally that games are designed for audiences. For those actually wondering, it’s probably not the best game for your child to grow up on if you haven’t been involved in showing them that shoving a sign post through someones head isn’t nice.

On from that, the game deserves the praise it has gotten in the media so far for being such a great looking and excellent controlling game, the game was actually a joy to play through, motions were simple and illustrated on screen without interuption and it wasn’t actually all that absurd. Players get exposed to MadWorld as Jack, a mystery combatant with what seems to be a bit of a side agenda, as the game pans out players rank up by meeting score quotas and taking down bosses, the story of the city and of your investors slowly emerge from that point as you infiltrate the game further hoping to reach the crown.

The game features multiple attack methods such as basic melee combinations but it strives on creative kills, stuffing tires on enemies, shoving poles through them, slamming trash barrels on them and then repeatedly impaling them on spikes for maximum point rewards. Really the game is quite magical in the sense that it goes completely over the top to seperate itself from anything remotely serious.

The other reward for me was the soundtrack, it seems that every now and again Sega really cranks out a superb soundtrack, Jet Set Radio was quite a good bit of fun but MadWorld was the modern violent take on how they can go about a great mix. Unfortunately it was a limited release and goodness if it isn’t hard to track down in any form let alone find it for less than about $50

Overall the game is great, the graphics are great in their high contrast form, the combat is superb and easy to execute, the music is a welcome change and the flexibility of the game shows through constantly without feeling heavily repetitious or like a complete gimmick. For anyone up for a good violent bash MadWorld is a must have for your collection. Personally I’ll be giving it another play through to try and really raise the stakes on my existing scores. 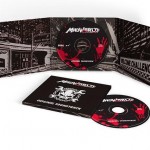 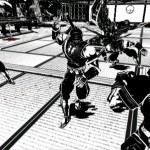 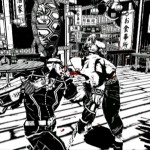 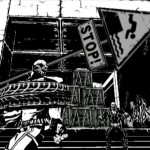 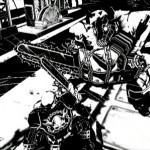 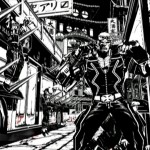 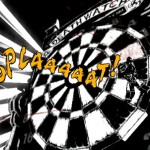