Vin Diesel is a man of many interests, the guy steps into any field and invests himself in it quite a bit, with The Wheelman Vin brings this around again as moves straight out of box office hits are included right into his latest joint title with Midway (and Ubisoft).

The Wheelman as a result comes off as a bit of a fun title, there’s blind action that dominates the game, things like air-jacking and the focus attacks are entirely show driven and pay off well for the gamer since they’re often relied upon only when things get heavy, in the midst of a police chase or faction dispute these items are remarkably helpful and great to watch.

The game works to keep the player in some form of transportation the whole time though, without a proper ride the game is dull and a bit slow to say the least, things really were made to be passed at 100mph simply because the game world is so expansive and detailed.

Players wondering about the story need not look very far, the game pits players as an undercover mole playing wheelman to multiple crime cartels in Barcelona trying to uncover details of a greater heist rumored to be able to change the entire landscape of the city once it goes down. The fortunate part is that while this is a rather important event, it’s not all there is to things, players are also catered to with a list of other things to do in the city such as cab rides laying waste to the city to break records, escort missions and so on. In the end there is a main storyline waiting at home impatiently while you stumble in wreaking of burned cars and gun powder but it doesn’t urge you to indulge it, the game simply pokes the user to continue their path of pitting rival cartels against each other to establish a uniform breakdown.

In the PC version of the game players are treated to some impressive visuals, unfortunately they need the hardware to back it up, players that have gotten by on older Intel systems and AMD systems will note that the game might chug just a bit, this is more or less a porting issue, Ubi / Midway made no attempt to include a remotely helpful options menu to tune down the visual aspects of the game, given that it is a UE3 based engine the game should be able to scale quite well actually. The problem is that it seems they rushed it out of the door and hoped that the enthusiast market might carry it through. I would recommend a Core 2 / Phenom based system for CPU power, install the game on at least a SATA drive with 3.0Gbps capability and have a fairly recent video card to power it all since the video stream simply eats up system resources and goes into a slide show if players aren’t packing enough power.

Overall is this a game to get? If you have a fairly strong PC that you built recently it should work fine, if not skip the PC version and get the console edition instead, chances are the streaming issue isn’t really existent on the platform which would make it a lot easier to enjoy. 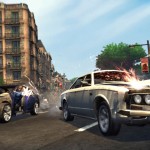 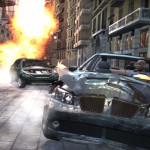 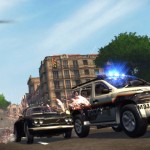 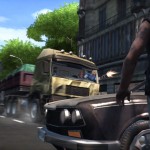