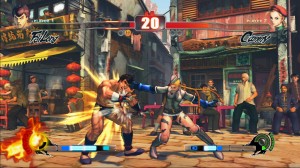 Street Fighter is a longtime favorite for me, the game combines technical mechanics with fast combination chains for devestating moves, for some players it becomes an elevated mind game where each player strives to out-think the other in how each jab, roundhouse, or throw is executed along with a fury of special attacks.

Street Fighter IV already hit the console scene earlier this year, the PC version was delayed to incorporate online play (Games for Windows LIVE) and most likely to try and stave off piracy as well since it seems like everything and it’s mother is ripped these days. I was fortunate enough to get a review copy sent my way though, I haven’t gotten into the online yet as I’m working on unlocking everyone first but I can say this.

The game is another evolution of the series, the game takes the fluid body mechanics from SFIII and brings them to a higher level of refinement, characters have a more refined array of attacks and specials that can completely shift the pace of the game if chained properly, the dynamics are fairly well balanced with the exception of Sagat and Seth still being quite high powered. 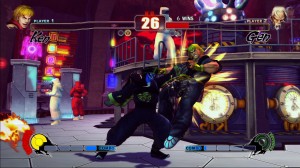 For gameplay things had to be put to the test, yes it was designed to be used on a keyboard and the Titan DKT did respond easily to key commands but the real arcade feel came through using the X-Arcade solo stick, combos were easy to set off and overall I noticed a huge step up in accuracy compared to playing on the 360, I could execute more moves, time specials with more precision and smash the life out of Seth with less effort, the biggest thing to really note is, Microsoft dropped the ball by restricting who could and who could not produce accessories for their console with that locking code in their USB, I mean really I probably would have questioned what more I could do on the PC review given that.

The last part of course is the performance, the game was ported over from the console so naturally it seems like bugs would be encountered. On a fairly legacy based system things stack up quite well for performance. My Athlon X2 4200 with ATI 3850 is able to run the game in Windows XP at 1920×1200 60fps with full settings minus AA as the 3800 series has a bad implementation that causes a huge performance hit (Get the 4800 series if you’re thinking about a 3850 or 3870, for AA you’ll thank yourself) the game reacted smooth, the install was a breeze and loading times are minimal, really they’re limited to the speed of the HDD the game is installed on. Overall the quality to the console port seems to be on par until you break into the additional visual modes, personally I play on ink post processing all the time simply because I like the visual impression it gives. 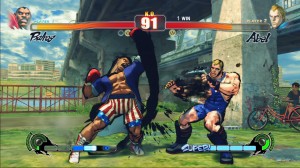 If you have an X-Arcade or have the cash for one, if you have a controller or intend to get one, then really consider Street Fighter IV, we can always hope that one day MVC2 comes to the PC, but until then this makes PC gaming a bit more diverse and a bit more enjoyable and really it is what people need these days, a break from the day to day shooting spree that we’re blasted with in gaming now.