EA has already taken a few international fighters over to their side of the fence since this issue broke out, today though the company announces they’ve picked up Randy Couture and Jay Hieron as well.

“I have been a part of MMA for over 10 years and I am excited about the global visibility that a game like EA SPORTS MMA will bring to the sport,” said Randy Couture. “Like my fighting career, I look forward to taking on all comers in EA SPORTS MMA.”

Randy Couture, a 6’1”, 220 pound heavyweight, who currently holds a 16-9 record and is a five-time MMA champion. Couture, a living legend in the MMA world, utilizes his wrestling expertise to take down and control opponents before finishing them off with ground and pound strikes. Couture is scheduled to fight at the end of this month against former Pride World Heavyweight Champion Antonio Rodrigo Nogueira. In addition, this is not Couture’s first foray into the world of video games, as he was featured in EA’s Command & Conquer™: Red Alert™ 3 as Commander Warren Fuller.

Jay “The Thoroughbred” Hieron, a high-profile fighter, joins the EA SPORTS MMA roster and will be taking on Jesse Taylor in tonight’s STRIKEFORCE fight on in San Jose, California.

Hieron currently holds a 17-4 record and the Long Island native utilizes his wrestling prowess as his primary fighting style but has become a formidable striker as well. He fights out of Xtreme Couture in Las Vegas and was the last Welterweight Champion of the International Fight League.

How the UFC will respond? no one really knows but it is crazy to see things picking up steam after all the initial fire went down about kicking people out of the association. 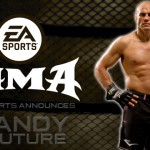 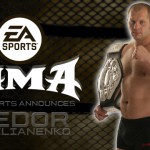