You already knew that one, but I got to check it out live at the Best Buy demo nearby which was pretty cool. The units on display were showcasing the features of the unit minus that of the browser. I was able to listen to extremely clear HD radio signals with nice range across the board, not a lot of clipping as I moved around which seems to indicate the antenna is pretty strong. I think the biggest thing here is the clarity and the fact that if one doesn’t have a receiver for HD Radio they can get it on the spot via the Zune HD in their home or car.

The unit itself is sleek and slim, it takes about 2 units to equal the width of a first gen model, the construction is pretty rigid and comes in two flavors right now for the consumers, the onyx black 16GB model and the platinum silver 32 model. In person the silver model is really impressive, more-so than the onyx with the brushed look and nice contrast on the side profile of the Zune. The screen is vibrant for color and the OLED display is very bright even from sharper viewing angles. Overall during video playback everything was smooth and very well rendered, colors on the screen didn’t face patching or gradients although really much of that depends on the source material.

The unit was also plugged into a TV using the AV dock and HDMI, the playback on screen was great although thumbnails were a bit low resolution being extremely blurred in large scale, the dock seemed to work but there was an audio issue with the display system at Best Buy, so if it was a store issue or a device problem we don’t know. Chances are the HDMI audio works fine and it was just the HTiB setup they were using, they were trying to figure out how to use the standard stereo cables but I never saw any progress from there. The unit seems to deliver on all fronts, 720p playback over HDMI, high contrast brilliant color from the OLED screen and new features as well. Those familiar with the original AV system can rest assured that the functions haven’t changed and the remote handles things just the same.

Overall the unit is sexy, slim and powerful to say the least given that’s powered by NVIDIA. Hopefully we get to check out the unit, we were on the list early back in May 2009 and now Microsoft’s PR division has taken to giving us the run around about how demand is so high now for review units and we should have gotten in touch earlier (WE DID, BACK IN MAY 2009). Hopefully their team doesn’t fail horribly, it would be a shame to intentionally botch their review units to those who acted fast. 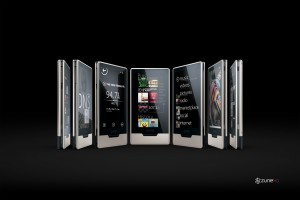