While Yakuza 3 has just been released in the US, the development team has been working on the 4th iteration of the franchise. At E3 2010 they had the game on the floor showing off the latest combat. For those who played the Shenmue franchise or even Virtua Fighter, the motions and control should feel similar. Yakuza 4 brings a new package of stories, crossing between police and crime bosses from around the region.

While it wasn’t possible to play through the story itself, the combat was enough. As a king of the streets fights aren’t easy, group battles are all over and it’s up to the sword / barrel / nunchuk, spear wielding boss to settle it. Combat was simple and fast, quick button presses threw out kicks and punches with power moves to finish each enemy, some attacks able to strike down multiple enemies. For those wondering, the combat tree exists so any player can tailor their character to their tastes; close combat and weapons training are only the tip of the iceberg.

For those looking for a trip down memory lane, Yakuza 4 brings the heat with painful finishing moves and bone crunching strikes. Being a crime boss never looked so fun until I sat hands on with Yakuza 4. 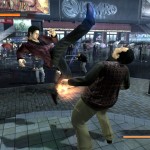 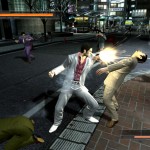