AM2 is just wrapping up as I write this, but as a potential force it’s only starting after this inaugural year. For those that are veterans to Anime Expo it really has been the only pure Japanese animation event in town, you have SDCC but it has arms in everything out there. As opposition there are many fan events not run by the SPJA but often they fall under the radar, AM2 was anything but that with high profile members behind the curtain to arrange the show for an impressive first year showing with a new staff group and venue at the Anaheim Convention Center.

To kick things off, AM2 started this year with a unique proposition to everyone, entrance and events for the most part are free. Video panel rooms, live programming, concerts and even the exhibit hall weren’t checking for tickets or passes and the public at large was able to join as a part of this first year event. There were a few special events that did require it but even then the passport was a fraction of the cost to current major events. For the most part it took over the ACC by capturing upper floors and Hall B. With some extra polish there looks to be a gem here, I’ll go through my experiences from Day 1 at AM2 (unfortunately I wasn’t able to catch 2 and 3 due to some unexpected changes in plans).

This is the litmus test for many fans, if you have an exhibit hall stacked with retailers side to side, you’re considered godlike to most. Unfortunately conventions have been seeing less retailers in their halls though, if it’s the economy or high rental prices I don’t know. AM2 suffered in this area, what they did pack was quality but the volume wasn’t so high. You could successfully see and pass through the whole thing in a bit over an hour if you were taking your time through everything. A big issue that came as well was that Hall B is HUGE, having your exhibit hall crammed to the side and covered by drapes only hurts the visualization of the space. Honestly with 10 or so extra people selling it would have made a big enough impact to counter it. Bigger names would have been nice and even a corporate showing would help perk things up outside of Media Blasters.

Again, a helpful measure to keep people busy or attract other fans, the area was largely absent from the show and what factors hit that are pretty unknown. When the retailers have some higher kicking prices though, many flock to the fan artists to save the day for cool finds. Catering to them early or with competitive spacing prices might have helped here, as a whole the community seems to be a bit regressed as of late from participation. It needed more though to make it attractive to those passing by.

Until this year I had never participated in a Summer Festival, after this year I can say I would again if the prices were a little friendlier. I took my daughter this year to the event and she had a ball but for $1 per ticket it seemed steep. After about $10 we called it a day on the games there, had the games been 50 cents or less for kids with simple prizes or tickets for children it would have been a better deal. Even the staffers were shocked about the ticket sales for it. It shouldn’t be too shocking, from what I know most of these take place outside when it’s July and it’s on blacktop and anyone from the area knows that July on blacktop means that you’re slowly cooking yourself. Having the Summer Festival inside was a great idea, it needed more games though and maybe a little more style though.

Having a legendary candy maker crafting animals isn’t exactly catering to food needs; having hot trucks with delights is catering to the food requirement though. I’m not sure if the ACC came down on the AM2 team or not but having the hot trucks outside was a bummer and many didn’t even know where they were because the arrow was pretty vague. Next time working out how to have them indoors lined up would be amazing because people wouldn’t be walking blocks to food places in the heat and not wanting to walk back or being too tired to finish the day. Integration is a must.

I can’t talk bad about this, after finding the LP rooms I was having a good time, between major events they were screening shows to keep the ball rolling which was nice. They actually had a variety of events to see and fan panels which was pretty epic. The video rooms were stacked through the day with break periods that didn’t actually hurt anyone, in fact if you needed to keep your fill going, you could walk over to the next room and catch something new. If nothing was meeting your need you could throw down on Street Fighter IV, 3rd Strike, Marvel Vs Capcom 2, DDR or multiple other games to get your action fill. These areas weren’t really lacking at all and were easily accessible.

Having the entire 3rd floor of the ACC just for shows, there’s something magical there. The team from AM2 didn’t miss a beat on this one, the shows were probably the biggest impact on my visit to the convention this year. After years of having to wait in line for tickets and entrance it all stopped. AM2 adopted a Comic-Con style policy with a twist, if you’re there you can go in, if you don’t want to be there, you can go. You don’t need to wait for tickets or waste other parts of your day to hope to see something. If you have a passport though, you not only don’t have to wait if there is a will-call line, you can just get inside and have fun as you wish. This year it worked out that everyone could pretty much enjoy things, I have a feeling next year will be a little harder to pull that off. Music acts for AM2 had my jaw on the floor, Heidi was amazing to see and even my daughter was jumping and dancing to the music which was awesome.

This is big deal that I saved for last, many that I talked to were hanging out in Hall B wondering if this was all there was to see, if the live acts would be on the Summer Festival stage and that it seemed like it would be much larger than it was. It looked like passport holders were able to get their hands on a book but freebie entrants had no real clue and the information booth wasn’t exactly standing out to everyone. Having a chart for the show on a large foam core board would have been nice. Having arrows or signs to lead people around would have been great too because the volume of traffic wasn’t high enough that everyone could just assume things. People need to know what’s going on especially when you’re sharing the ACC with another convention entirely. This was a huge black mark for my time there, I even had part of my party leave because they thought Hall B was all there was.

It’s a shame I couldn’t be there all 3 days, I really wanted to but it’s not always so easy. I’m glad I attended day 1 though, it was a fresh twist on events I remembered being much simpler years ago. AM2 has a chance to redefine how everyone gets to interact at these conventions and I really welcome their efforts so far. I’m really hoping they can pull everything together in 2012, with more exhibitors, better social communication and more focus around the fan experience it could be pretty epic. Move the food trucks in, add some signs, bring in some extra retailers and see if some of the big boys will come down to hang out. The show took the experience back to the basics and made it openly accessible once again, it just needs to refine how it finishes that experience.

Also, needing more cosplayers. Maybe be one of the rare places to actually deliver a creative approach to series meetups instead of having security kick everyone off the stairs or everyone bake outside. 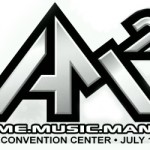 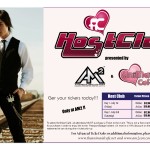 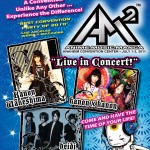 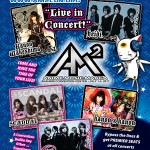 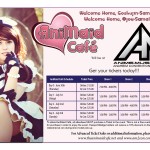 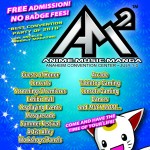