Serious Sam 3 is coming, to celebrate this legendary event, we’re getting 3 games to lead up to the release date. Serious Sam: The Random Encounter is the last chapter of this magical saga, bringing JRPG elements to the franchise while keeping the foundation alive. Admittedly, Vlambeer says they know nothing about J-RPG’s so it’s just a bunch of shooting everything in the face which is fine by me, the world could use a little more shooting things in the face in gaming instead of whatever it is they’re doing. I was able to sit down for an hour with the preview build and find out how entertaining old school face blasting could be again.

Jumping into the game I fell into a sense of nostalgia, most likely because my 1920×1200 screen was glowing in 8-bit pixel gaming love and amazing music. For retro fans alone, this is a game to look into as it captures the unique style of the era while mocking so many horrible faults of the genre. Sam and crew (yes crew) even go so far as to engage in deep puzzle levels taxing players to the limit, at least it taxes their weapons to the limit I should say. Mass swarms are found every time Sam and company walk into a random encounter situation, they do get harder and they do have a variety of attacks that can leave members dead or ineffective.

Like a traditional J-RPG there are menus and options, generally you find yourself picking if you want the big gun the bigger gun or the biggest gun and even with that awesome potential you have issues. Rockets are epic but if you have a group of foolish enemies crowded in front of you, they’ll eat them all and you will have no extra ammo for strays until the next choice. Sometimes, the simplest weapons like the revolver will prove the most effective in sticky situations, trying to expect those will be critical in the game to survive.

The art in the game is amazing, not only is it 8-bit themed but it takes on a 70’s badass vibe as your fellow face shooters pack Afros and burly mustaches, it has been a while since I thought something was so purely brutal and The Random Encounter gets it done with ease.

The game will release soon on October 24th via Steam with a price tag of $4.99. We’ll try to have a final verdict out when it goes live. 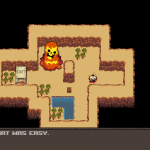 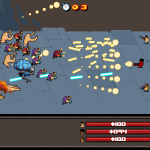 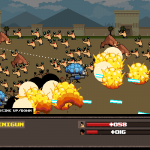 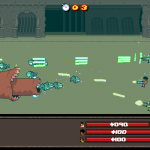