I was lucky enough to get my hands on Disney’s new Vinylmation Park Starz series 1.  The Park Starz series takes iconic Disneyland “characters” from all the parks and puts them into highly detailed vinyl form.  The series features 11 different figures along with a mystery chaser.  The figures included are, Figment (Journey Into Imagination), Goat and New Guinea Boy (it’s a small world), Bride (The Haunted Mansion), Robot Butler (Horizons), Ice Gator (Disney’s Blizzard Beach Water Park), Skeleton Pirate (Pirates Of The Caribbean), José (Enchanted Tiki Room), Big Al (Country Bear Jamboree), Yeti (Expedition Everest), Abraham Lincoln (Great Moments With Mr. Lincoln) and Giant Squid (20,000 Leagues Under The Sea).  The two tins I bought contained Big Al  from Country Bear Jamboree (a personal favorite) and José from the Enchanted Tiki Room.   José the parrot is very well detailed.  He has little holes on his sides,that you do not even see,for the perch he comes with to fit into.  The paint is wonderful and the colors are extremely vibrant.  He is quite heavy for such a small figure and is a really adorable collectible.  For those of you who really want this one and may carry around a scale when you shop (and really, who doesn’t?)  he weighs in at 6.1 ounces, tin and all.  As mentioned above I also got Big Al, which is one that I really wanted!  He, like José, is also very detailed.  Big Al comes equipped with a little yellow guitar and a lot of personality in his face.  He, in my opinion is one of the best looking in the series.  Again, like all the figures in the series the paint is perfect as is all the detail.  For those shoppers with their scales out, Big Al weighs a hefty 8.0 ounces! 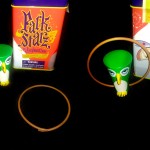 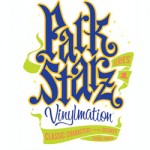 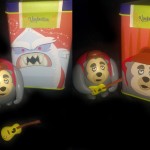 I do not have one bad thing to say about these figures, they have detail in the way that only Disney can detail things.  From the heavy-duty tin to the paint and design of each figure.  The tins that the figures come in are display worthy themselves.  They are quite large, metal and have awesome graphics.  This series is available at various locations, however your best bet will be at one of the D-Street locations in either California and Florida.  I recommend getting these quickly, at the Anaheim California D-Street location they were selling very quickly with people buying both the individual figures as well as people buying by the case!  This series is sure to sell out extremely fast and once they are out, there are no more.

As a quick note to collectors both old and new, if you buy a figure at D-Street, open it and find that you don’t want that particular one they have a trading system in place.  You can exchange your figure once per day.  If you do exchange it, what you get is not in your control, so you may get something you like more but you may also get a figure you like less.  It’s a gamble but it’s also really fun and takes some of the sting out of the expensive price tag.

Author note: These figures are are available now (released Friday, October 21st) at various locations including D-Street in California and Florida.