The latest battle in the King of Fighters is here, join the legendary teams as they battle it out once more across the world.  At least that’s the idea with any new game in the series but for KOF XII it wasn’t the case, instead we saw a complete overhaul of the game, all the animations redrawn by SNK and a largely unpolished title. For fans of the series it brought a bit of doubt into the future of the game, missing moves, missing specials and a UI that was a bit more futuristic than anticipated made it even stranger than usual.

Fortunately SNK has listened to the worries of King of Fighters fans and in XIII brings so many improvements it’s almost a bit crazy, I’ll go through them in sections to keep the clutter to a minimum.

XII featured 22 standard characters in arcade mode, many classic teams were missing or incomplete, a bit of a pain when you have a series where people have developed a flood of favorites to use. To make matters worse, SNK nerfed moves and specials from these characters in the game, even if it was a matter of time I think fans would have been happier with the game delayed and complete, instead we were halfway there and struggling. In XIII we have 31 characters playable + 2 unlockable which is a solid expansion, not only have many (not all) moves returned but they’ve upped the ante by bringing in new specials and improved EX specials.

I would be lying if I said I didn’t have a wish list of characters to return, hopefully we can have a dream match version coming soon that brings back characters like K’9999, Yamazaki, Blue Mary, Angel, the other members of Korea Team and more.  For what there is, it’s amazing though, the hand drawn quality of each character is extremely fluid, you can see the flow of each move, each shadow and each shift in their attire. SNK has invested so much time in art for the game that it’s an amazing reward to those who played from the early days. Even if they could swing another 11 characters it would bring it close to the roster seen in KOF 2002 and it would allow a ton of versatility for the future.

There are some character boosts as well given the time elapsed since the last game in the story, watch out for improved ability from Joe, Andy, Kyo, King, Robert, Yuri, Kim and more. Not everyone gets a boost, Iori takes a huge hit without his Orochi power. Other characters do have changed styles but not necessarily weaker or stronger changes to their array of attacks though. Vice feels like one of these by taking a more conservative approach to her fighting poses and style, no longer slippery or vulgar she’s a tighter frame fighter. 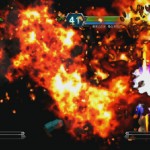 Hyper drive mode may have gamers scratching their heads, think X-Factor from the MVC3 series, it’s not as severe but it boosts last chance options for survival as speed, attack and defense are all raised temporarily. Combine this with Desperation moves, Specials or EX moves and things get really sketchy as new chain attacks bring extreme devastation from any character. It’s not as cheap to use for pure damage increases but it certainly spices up any fight and helps so very much in the boss fights.

For those unsure about Desperation Moves, they’re now charged regular moves using your special attack gauge instead of specialty attacks, because of the damage and extra strikes you can actually chain these moves into EX specials, specials or just regular combination attacks. Timed right, these crucial strikes can change the tide of a battle for any player. When tied in with Hyper drive and a critical combo these can reach 40+ strikes for a single attack victory when luck is on the player’s side. Desperation attacks are now a twist on a classic feature but the expansion allows for versatility in battle that wasn’t seen before.

For the most part, the KOF formula has not had much change, HD attacks and Desperation do add variety but they’re not always needed. You do have guard cancels and the classic roll ability to get you out of a fireball showdown or even a super showdown in some cases but the basics are there and unchanged. EX and Neomax specials are there for use but they do make you work for them, instead of just making it a repeat direction they do add some variety to keep it from being pure controller spam luck.

There are bosses in this game, yes I know a single boss usually cuts it for KOF but we’re not that fortunate this time around, in fact I think gamers may have royally enraged the gods of KOF at the SNK studio. Saiki is the first boss, harnessing Orochi power to become a demon god on Earth, given that everything has become ashes once he powers up, it’s not a good sign for how the match will go along at all… Keeping short distance out of arms length is a key step, if you end up on the other side of the screen you’ll just beg for abuse from him, if you engage him in close combat you might as well wait for the continue screen to appear. Kim Kaphwan and Yuri shine well in these fights with a range of air and ground dash attacks that are often too quick or short for him to catch you mid-attack. Ash, Kyo and K’ also do well to chip away at Saiki’s life gauge when being careful.

Have you jumped yet? Go ahead.

Okay so Saiki is out of the picture, your team is victorious and order is back in the world. Well, almost, Ash decides that at this point of vulnerability it’s time to step in and collect a bit more Orochi flame, his actions lead to Dark Ash. A Saiki/Ash hybrid supercharged as Ash already has 2 of the treasures collected (Kyo is the only one running free). This Ash is different in the sense that he’s a wild form or Orochi form and spams attacks like no tomorrow, fireball spam, upper cuts and really annoying teleport attacks all fall on the table. To stop him, you need to juggle him, keep him busy with short burst combinations and don’t aim for chain special attacks as it will most likely fail. If you give him too much room, you’ll spend your entire life gauge trying to get face to face again.

Anyone can really chip away at this Ash or beat him outright, just enduring and knowing when to roll and use the HD and Desperation attacks is critical to success. 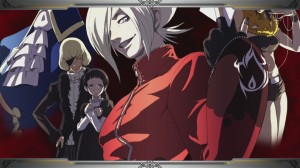 While there is a wider story that closes out or seems to close out this arc with Ash, the personalized stories between characters feel like the real draw this time around. In the past you had a series of one liners or cheap comments from characters. This time there’s a sense of personality with everyone and they’re all unique between each character. SNK actually invested a bit of time on something that seems small but rewards greatly, the interactions between Robert and Andy are a great example of it, or even Andy and Kyo. A light-hearted exchange between characters is really enjoyable before you slug it out to see who will go forward, also it reveals a little history about what each character has done since the last bout.

For those hoping to have a bit more explained finally, play the story mode featured in the game, it’s pretty amazing driving your way through each team and watch their fate unfold in the game, it’s a bit different from the regular arcade story line and it forces you to stick to the hard teams instead of picking your own group. There are a ton of spoilers in there but overall I find it one of the most interesting areas of the game. Also you can flash back and watch special movie sequences as rewards for completion. 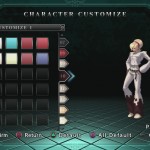 The visuals in the game are amazing, each character flows so well in design and form that it’s hard to imagine going back to anything else. The backgrounds carry the same appeal and often use teasers like the giant Mr. Karate mask in the background of one stage, other times you’re left to guess some background choices such as a battlefield behind you between two vague characters. Either way the look and execution are amazing, only those from possibly Blazblue could hold up to them for resolution but even then they would fall short in the execution and treatment of attire and fluidity.

For those who feel that adding 9 alternate costumes isn’t enough, you have a custom character option as well to color and style your favorites with a large variety of attire, upset about a missing color scheme for your favorite team? Make it on your own or improve the existing ones and have something unique to your system. The options are large and some of them are a bit disturbing like Joe Higashi’s tiger stripe pants, I know that’s already too much information but I had to see it firsthand so there.

The voices and music are solid throughout the game, although when you reach Dark Ash the vocals seem to go to hell, part of that might be the echo effect from the chamber. Either way, Ash comes off like a goon for vocals more than anything and it’s a bit sad to say for the character that’s supposed to act as a supreme figure in the story now. Ignoring that we can divert ourselves to the soundtrack, there are a huge list of songs in the game this time and they’re a wonderful fusion mix of rock and orchestra that keep the pace of battle on the edge. While only the second game to break free from the old engine, this is by far one of the best showings SNK has been able to make for the series. Top that off with remixes of the past games and it’s a treat for any fan of the series with the execution and attention to bring these to a higher quality of production.

If you’re lucky and score The King of Soundtracks with your game you’ll be treated to a 4 disc collection of all the amazing tracks from the games since the ’94 introduction.

King of Fighters XIII is the game I wanted from XII, it’s not perfect but it’s a solid array of characters, it has most of their moves and it is entertaining overall. The story mode adds depth to what is normally a mystery for casual fans, elaborating on the Orochi saga, the mysteries behind ash and the world of King of Fighters at large. 33 Characters is a big leap not including boss figures so it’s great to see that SNK wants to expand the lineup, honestly the roster is about average now to other KOF games so its hard to complain for more. One can only hope that they keep going for another Dream Match title so that we might be able to see everyone revamped in full glory. SNK has made KOF a success again and minus some issues with the bosses being stupidly hard most of the time, it’s a really an enjoyable game this time.

*Special note: I do recall there being an issue for character visuals between the 360 and PS3 versions of the game, the PS3 being a bit blurrier than anticipated. Judging by some of our screen gallery composed of shots released by Atlus it might prove true again. 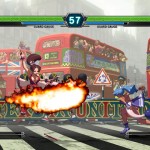 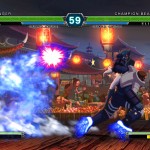 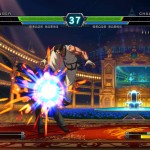