BIGGER, BADDER, BETTER …WWE ’12 looks like it’s finally making strides on becoming an all around complete game for its genre with a 70+ character roster and a promise of more to come, WWE’12 is giving the fans what they have asked for… lets jump in and go through the details.

The look of WWE ’12 is a huge leap from SvR 2011, the minute you press start you’ll notice the menu layout is simple and direct. I think this helps the loading times significantly, it is the most noticeable in the creation feature. THQ did a great job capturing the production style of the television show, from broadcast camera angles to little things like the mini titantron’s around the arena. The ring entrances are more cinematic and authentic to its TV counterpart, they really capture a WWE event atmosphere and its intensity.

Over the past 3 years, the SmackDown! Vs Raw series controls have become so complex that THQ featured a training gym with a move checklist so players could learn the control scheme. That’s not the case anymore, for WWE ’12 they’ve simplified the button layout entirely. Since the weak/strong grapple system from earlier versions is no longer around, you can only execute certain moves based on your opponents physical state. A button initiates grapples, with another press along with a direction on the analog stick you can perform one of the four standard moves each grapple position has. This setup allows you the ability to switch between positions using the right analog stick, if your opponent is groggy you will be able to perform a stronger move. Another change in the  game is the limp targeting system, in SvR2011 players had a HUD layout of your opponents body would showcase which area has taken the most damage, it never made difference in matches it was just for show. Now you can isolate a specific part the body by holding the RB button when engaged in a grapple, a similar HUD layout with the face buttons assigned to each area will appear. Pressing a button that corresponds to the head, body, legs and arms will affect opponents hindering their movements and make it easier to hold submissions. Dynamic Comebacks give the player who’s on the verge of losing a last-minute opportunity to turn the tables by hitting certain combinations of moves.

A.I. has gotten an upgrade, for those of you who play on legend difficultly there are some times the CPU use’s cheap tactics to boost its potency, it’s most noticeably when facing John Cena and Randy Orton.

The new Submission system (Breaking Point) moves submissions back to face buttons now, it now becomes a mash button mini game between players/CPU. When a submission is locked on, a breaking point meter pops up and the attacker must fill the meter to the top while the defender tries to stop the meter from reaching the end. Make sure you have your opponent nice and red or they will get kick out instantly on you.

WWE Universe back and by far the best mode in the series since GM mode for Smackdown vs Raw 2006. Being able to make matches and choose what brand wrestlers go to which event  is what fans always want in WWE games. This mode gives it you and then some, it kept me glued to my Xbox controller through this review. Universe now lets you  change brand names, arenas, logos  and which titles go to which brand. For instance, replacing the RAW U.S. Title with the European title and converting Smackdown into WCW Monday Nitro are some things you can do with this change. I was a little disappointed that you have to buy Fan Axxess DLC to edit character attributes though.

The Weakest part of the game I have to say is the Road to Wrestlemania, players play through months of programming as Superstars of Shamus, Triple H and a created player. With a large episodic format, players must play through match after match with heavy backstage and promo segments and even scripted events during matches. With each segment completed it unlocks special content for the rest of the game. I understand Road to Wrestlemaina gives players a different option besides WWE Universe, but it falls short  and if you’re a fan of RTW then you should enjoy this years game, but if you’re not I would suggest sticking to WWE universe.

The Customization for the series has always been astounding , in WWE’12  it can almost be overwhelming to see the wide variety of options available to players. This is what made this game what it is today, from wrestlers to  logos,  finishers, ring entrance sequences. Throwing in arenas makes this game even more exciting by re-creating past and present wrestling promotions  from AWA to ROH is now possible.

Arena creation is set up like create-a-wrestler,  You have four options: Ring, Ring Side, Electronic Billboard and other. The ring option lets you edit Apron, Mat, Ropes, Ring post and Turnbuckle Pad. The Ring Side option lets you edit Floor mat, Barricade, and Announcer table and you can even choose what logos or designs you want on the Billboard, you can literally spend hours customizing now.

WWE ’12 is one of the strongest wrestling games the WWF /  WWE has put out on the market, with so many options available it’s hard to imagine getting bored with this version anytime soon. Minus shortcomings such as the AI bias it’s a well designed game and a huge accomplishment for Yukes and THQ this year. With the holidays approaching fast, this should be in any wrestling fans gift list if they don’t have it already. 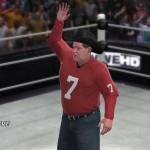 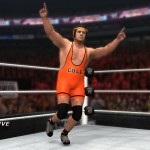 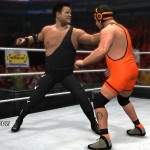 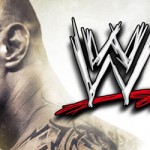 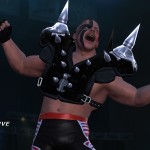 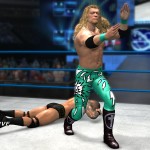 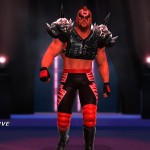 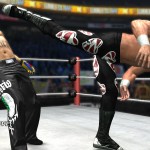 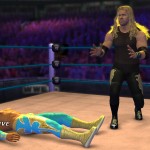