So you’re on a PC, you’re running Skyrim and loving it like mad and… you’re a bit frustrated at some of the visuals in the game. If you have a strong video card you’re not in trouble. The following tweaks will get you insane visuals without a lot of stress but you will take a performance hit if you’re on a lesser system.

Why the crazy suggestions? Lots of power and lots of memory are a must, 256mb variants and cards not able to keep up with the instructions may fall to the wayside. Even Oblivion mods took the game to levels where the CPU and GPU fell under the demand. With that said let’s get going. 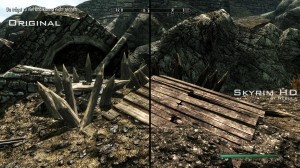 Loving the look of Skyrim but tired of the dull textures tending to slow things down? Love how things look great from a distance but have you cringe up close? If so, this is a must have starter pack to show some results. The mod updates your existing image files to higher resolution textures and gives Skyrim a huge injection of awesome in the process. This is still in progress so keep checking in for new additions to areas that might be on the to-do list though. 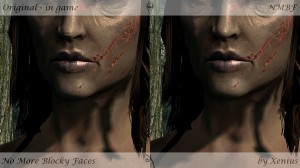 You run into people alllll the time in Skyrim, sometimes their faces just seem a bit… off. This mod fixes nearly all areas of the face so they look less choppy, smooth noses, faces, chins and etc are all there. Xenius the creator notes that eyes and brows are the only thing left on the list to wrap up, the rest of the features show immediate improvements and should make talking to someone or slashing them in the face just that extra bit more pleasant. Personally I didn’t notice the issue until after I saw this mod, then it started appearing quite often. 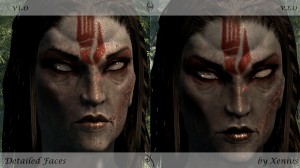 Xenius seems quite busy, detailed faces accomplishes what Bethesda had to hold back on,  the character textures step up in resolution and allow for tighter lines and finer details. No longer are skin pores huge and cracks dangerously large, combine this with the blocky face mod and things take a huge step up, even on the big uglies that run around Skyrim. It’s a basic tweak but again, you’re always running into people or they’re tracking you down to find their brothers, uncles, cousins, nephews, aunts, sisters penguin. 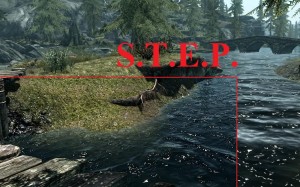 Sometimes it seems a bit insane to keep up with all this, for casual players and less tech savvy users, the STEP mod is going strong and it’s looking great. It packs in all the base tweaks, textures and items you need for an overhaul of Skyrim without the need to constantly check for mod updates on everything you’re running. I would recommend this for hardcore users or casual ones as it’s a great base to work from and you can only improve after that. Also for casual users the author promises to update the files and mods within the STEP file until the release of TES6 so you’re good for the next 5 years or so haha. 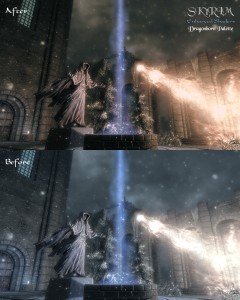 The shaders in Skyrim seem to do the job fine, although when you see things like the Enhanced Shader mod you realize there are some off moments that you might overlook from the pure action going on. Dragon fire in the night blazing through the sky and everything failing to react to the red-orange glow bellowing out is just one of those issues. Add it in and get immediate results to clear those areas you might start picking away at now that I’ve said this.

Changes include Adaptive Bloom, Enhanced HDR and HLSL sharpening to help boost the visuals even more. Skyrim does the  job with their HDR actually but the color palette could use some work as shown to the right. 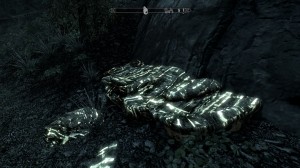 Doing the little things is a pain in Skyrim, as a last note in this post I’ll throw in Glowing Ore Veins, some sections of the game including the caves just get unbelievably dark and hard to ID ores and other items within. This takes off some of the stress but if you’re going for hardcore realism then it would be best to avoid this one.

Ores are identified by glow so you wont mine a single color and just hope it’s the one you need with no way to remember. The latest update turns Iron from purple to a reddish-orange as well.

Big thanks to the folks at Skyrim Nexus for bringing together a strong mod community. We’ll have more posts in the future highlighting other mods as everyone gets a bit more time.