Review – Conan The Barbarian #2: Queen Of The Black Coast – Part 2 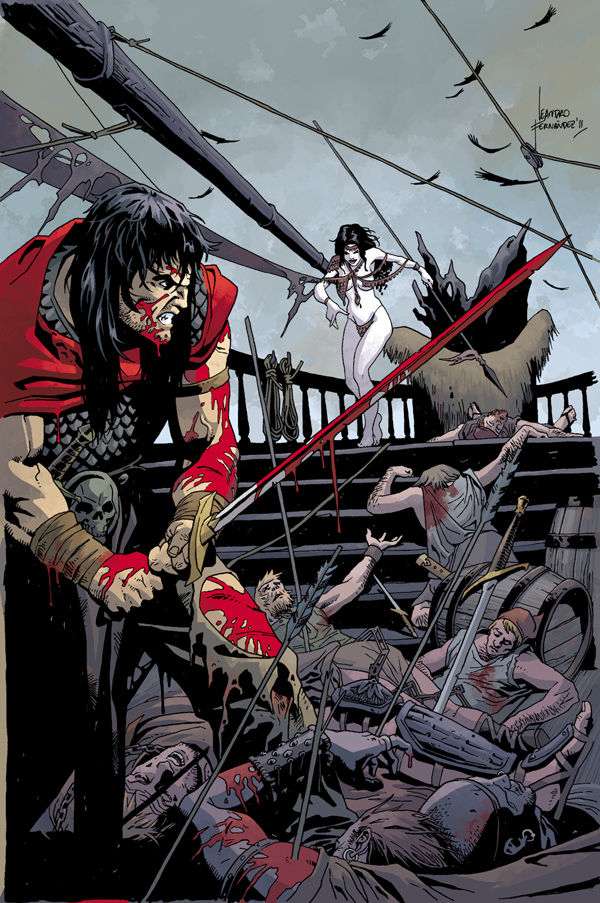 Review – Conan The Barbarian #2: Queen Of The Black Coast – Part 2

Bow in hand, Conan and Tito are closing on Belit’s ship, Conan begins to fire upon the ship with great accuracy and strength. He strikes many of the Black queens men, with faith that Crom will decide his fate, Conan tells Tito to order the men to arms with no reply. He turns to see a fatality wounded Tito with an arrow in his throat, With Tito dead Conan tries to rally the men and prepares them to board Belit’s ship. Once on the ship and greatly outnumbered, Conan fights his way towards Belit with no fear of death. He strikes down many of the men, he even jumped into the black sea after some of them. With only a handful of crew left and still outnumbered, Conan calls out the rest of them saying ”Who’s next or is cowardice gripping your hearts?” Covered in blood of enemies and a thirst to spill more, Conan ready’s himself and just when it looks as if his wish for a battle would once be fulfilled, Belit herself steps in….

Not much to say just Queen of the Black Coast Part 2 has a nice little twist at the end that most should like!

Final Thoughts: Action, Action should be the title for this issue, Once again Conan throws himself into outrageous situations like always and fights his way, when it comes to Conan you can never go wrong with a lot of action, Most of the issue is written as if a narrator is telling the story about the battle. Although I’m not feeling Becky Cloonan art style for this series it’s not bad, I just don’t think it fits.