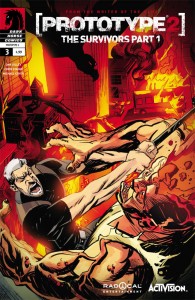 Alex has set his path in the Prototype world, issue 3 moves us back to the contamination zone with 3 new souls, they’re in the heat of the infection in the Red Zone. Blackwatch is in full force and the battles on the street are life or death struggles. Conrad, Marcie and Ami Levin are the survivors hoping to make  a break from the contamination and purge zone into some level of freedom and safety from this madness. We get a dose of the marshal law holding down the zones and the lengths that anyone would go to in escaping a daily life of not knowing if there would be another day.

[spoiler show=”Show Issue 3 Spoilers” hide=”Hide Issue 3 Spoilers”]Conrad is holding hope that his wife may find his notes and her way back to his arms, writing letters along the way documenting their struggle and stress. Marcie is relatively shallow for information and Ami seems to be the most vocal about the events acting as a biblical judgement day for humanity. Blackwatch in the Red Zone puts the living at the bottom of the priority list, as ground zero it seems as if anyone found there is suspected to be infected and must be terminated without exemption. The trio is able to execute their plan to limited success, instead of total freedom they crash-land in the Yellow Zone leaving us to wait for more. These zones actually play a key role in Prototype 2 and it’s interesting to see a little about the drama within them coming forward before the launch of the game. Hopefully the story ties all of this and the character swaps together though so we can make sense of it all by the launch.[/spoiler]

While Jolley is able to drive an intense story even without Alex, the art shift from Diaz to Staggs is strong enough to notice, there’s almost a struggle in The Survivors. Marcie tends to shape shift throughout the book as does Ami, even Conrad has many morphing moments that break down the immersion. While the color and ink hold up under the stress it’s a hard switch to make between the two issues, hopefully there’s a chance for Staggs to rebound in the event The Survivors ends up being another 2 part installment.