Pickles are a generally unchanging side snack from the ages, you have a small trio that generally cater to fans, the sweet, the savory and the sour. Today though we get some heat in there, the Sriracha hotties from Rick’s Picks, these pickles pack a sting and a slow burn as you snack through them thanks to the Habanero powder in the brine. While that might sound a bit crazy, it’s not as the flavor is smooth, refreshing and then after you swallow it you realize that eating a batch of them at once was likely a bad idea.

The 24 oz. jar packs crinkle cut pickles long brewed in this mix, we broke out half the jar for testing and gave it a go. The biggest thing we noticed is that while one might expect Habanero powder to overwhelm, it really doesn’t hit as hard as one would imagine, it’s a clean flavor with a low burn that would easily match up with a Santa Fe style burger to give it some kick. The pickling itself doesn’t pack a hard after-taste of vinegar and it holds off from any sudden bite, even when mixed the heat rolls on with anything it’s paired to. The pickles themselves were a mix for our experience, some pieces softer with a crunchy skin while others have a crisper bite to them. Given they’re locally grown you’re bound to get some shifts in the consistency but the goodness is still there. 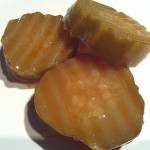 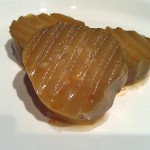 While there is worry about the hotties being a one hit wonder, the flavor is appealing to put on relatively anything, they blend with cheeses, crackers and regular food with ease. Even intermediate seekers of hotness will find this as a suitable daily eater unless they plow through the whole jar and they act as a conversation piece with friends over their concentrated hotness. The other thing that did stand out is the heat does intensify for damage when eaten on an empty stomach, in fact the hotties kick their feet up on the table and stay a little while so watch out. Depending on your batch or if you’re shaking them as well to keep the powder on the pickles your results will vary, out of the jar after sitting they were mild but with a bite, after shaking the jar up after our taste session it made the heat go up quite a few notches.

Overall the batch was a refreshing change, the flavor and crispness were unique as a shift, the spice isn’t too bold and it blends in without changing the flavor of everything else too much. If you’re a fan of hot foods and want to venture into something to expand your realm we do suggest considering putting a jar of these in your fridge. If this is new ground for you, it’s still worth it if you can stand above average heat in your food.

If you’re curious about what else Rick’s Picks sells I suggest checking out their site, if you want to know more about the history of Rick’s Picks I would say check out their handy FAQ telling all about the company.