The final episode for Spartacus: Vengeance is here, the temple has been raided and the slaves went on the run, pushed up to high to the mountains and stuck to starve this is their great battle for survival. Wrath of the Gods wastes no time bringing the tensions and stress of the group to the forefront. It is here the slaves make their final battle, clashing and starved and desperate to see light through this conflict and the entire season comes to a single head. 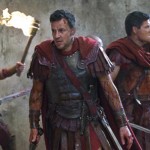 For Spartacus this episode is everything, moved from their camp and food and drink they hold up on the mountain holding a high ground and narrow path advantage over the Romans. Unrest is settling in and the fate of the people is grim at best, they rest in the winds and storms with small fires to keep warm but lack any additional comforts in their lives. It’s only expected the group would eventually snap and seek their own fate instead of being left to die on a barren hill, in their moment of conflict the first of many turning points hits his group. and the war begins.

The Romans fare no better, Ashur and his band of killers still rub the Roman soldiers with worries, their heightened status above the rest of the men continue to drive ill feelings between the soldiers. Such attitude is his downfall though, arrogant and dreaming about the world post-battle he embeds himself with no doubt about victory. Ilithiya and Lucretia have other plans for him though, setting him up for a challenge that even serpents tongue might not be able to escape and that which sets up his final task on the stage. 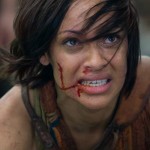 Unfortunately for Glaber, this decision while it seems to go into his favor, goes completely against him. Instead of stirring unrest and a breakdown in the ranks of the slaves, it gives new light and alliance. It also brings about the fire that was almost extinguished while sitting in the winds and gives a bloodthirsty new life to the group. Fans of Ashur if such a thing exists, this is a heart breaking moment to come, for the rest of the population, you can expect retribution in the most violent of ways. Ashur marks the start to the second half of this war and the real battle begins.

The Romans face their next move from Glaber, sacrifice and be victorious, storm the gates or in this case the mountain and rise to victory. On the other side, Ilithiya faces her task assigned, dispose of the corruption and evil that only Lucretia knows of , little does she know that this task and return to the house will prove to be an experience she can never forget or live down. An heir awaits, the storm is closing in madness rises throughout the land. 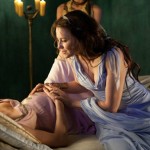 The final act of this episode is one that everyone has been waiting for, a clash of sides in the battle for freedom, in a moments notice the tide shifts, the slaves and Romans clash in battle, and the battle begins. Glaber sees that even in his most well fortified moments that anything can happen and the final battle begins. It’s takes up almost 14 minutes of the episode and it’s as ruthless as it gets. We see favorites embrace combat and tragic moments strike, the final section of this series comes to a close with as much intensity as they can bring to it. Lucretia, Ilithiya, Glaber, Spartacus and so many more bring their own ends to this arc of vengeance.

Visually this episode rises to their limit in Vengeance, capturing the right moods and moments with lighting, CG and while slow motion may feel overused it tells very specific moments in this episode especially in the final battle. It’s not the best but given how much they had to accomplish it’s up to par. Lucretia captures many moments from the lighting and drama in her scenes built up by the camera team.

Spoilers – These are the big ones

Mira – Met with an axe to her chest and shoulder, trying to provide ranged protection as Spartacus rescues troubled deserters. Her death is almost immediate as they reach the hill again.

Ashur – Slain by Naevia, a slash to his manhood sees him to his knees, a brutal rage filled hack-a-thon takes his head from his shoulders.

Oenomaus – Meets his end with the Egyptian, a powerful duo attack with Gannicus struggles to take down the giant

The Egyptian – Gannicus goes into what can only be seen as a complete rage, he fights in a way unseen and ends him for good.

Ilithiyas Child – Also lost as sacrifice to all the evil done in the house by Ilithiya, Glaber, Lucretia, Batiatus and Spartacus, the boy falls in Lucretia’s hands as she falls to her death.

Glaber’s army – decimated entirely by fire and steel, no one is left to tell the tale not even the henchmen Ashur recruited.

Glaber – given death by Spartacus, his fight is desperate and weak but his end is epic, his end marks the next chapter of the story, they are no longer rebels or slaves, they are an army to rise against the empire.