The arena has fallen and Spartacus drives a crucial blow to the morale of the Roman people, the freed slaves have hit a crucial turning point in their battle that sets them as larger targets to the empire. All is not so simple though, Oenomaus has taken critical injuries during the collapse of the arena and rests at the will of the gods for his survival back at camp. Crixus and Naevia are reunited but it’s only the beginning of a very long road for them, just as their stories seem to all be gathering back together we see it’s only the start of another long road for everyone. 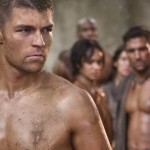 The Romans have their internal problems to sort out, a failed attempt to capture Spartacus brings stress upon Glaber but just as frustration begins to cloud his mind, Ashur has another plan to aid him and show the downfall of his men in a brutal fashion. The miracle worker for Batiatus is in his groove and pushing to do anything he can to rise from captured slave to loyal aid to the empire no matter the cost is to him or anyone else. Glaber doesn’t end there for story, triumphant over Ilithiya he sets the tone for her conduct from this point on and her dear Varinius is nowhere to be found, in fact he’s speeding back to Rome after the flop of the games and change of events.

Glaber finds himself at odds on many fronts including how to build his next pursuit against Spartacus, with ultimate control falling into his hands after the passing of Ilithiya’s father he takes it upon himself to force his will on those who hesitate to support including the often mocking Seppius. With Ashur at his side now, you can bet that things will only get ugly under their shared domination and pursuits of anything they wish.  Even Lucretia learns this as her role fades with importance and her plan ties her into the mess with Ilithiya, falling behind the rising Ashur who manages to crawl ahead at every opening. 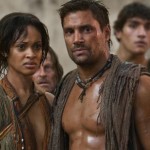 The story isn’t all about the Romans, Spartacus faces his own challenges as his group struggles to figure out their next plan as a group, the loses they encountered and the pessimistic tongue of  Gannicus start to eat away at the group. Crixus and Naevia become a central point as they struggle with their first real encounter with each other after her enslavement and passing to the caves, it’s a hard adjustment for the couple that rings through each scene. The trouble with their group grows as a traitor emerges and sets off a battle that could be the end of their group in a single sweep, just as quickly as it begins we see Mira bring a close to save the sanity of everyone and protect the one she cares dearest for.

Chosen Path for Spartacus: Vengeance is a plot heavy episode, they’re putting a lot of the fractured stories back into a tighter box again, Lucretia and Ashur are no longer side stories, in fact they’re very much at odds with each other now and it will likely only get more heated given the actions of this episode. We see Glaber and Ilithiya taking a huge shift in momentum as the removal of Varinius and her father leave her relatively helpless, instead of being steps ahead of Glaber she’s completely without support now or any friends that could help. Some of that loneliness could have probably been avoided had she not thrown them as fodder to the Gladiator rebellion and bashed one of their skulls in though, it’s not likely she was thinking that far ahead. Spartacus and group face their next challenge to move forward with emotionally charged issues passing through key members and distrust shocking the entire party. 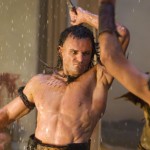 If you haven’t caught up yet, I’d suggest doing so now, the second half of the season arc is about to launch and it looks to be quite a violent and complicated one. Thankfully Starz airs the show quite a bit even during the day of the next episode.